Synopsis:
Gérard Favier is a famous composer who has been married to the charming Sylvia for almost 20 years. Still deeply in love, they walk the streets of Paris and, one day, they hear a sonata that Gérard once wrote, played on a piano in a house. Gérard is surprised to find that the piano player is a 20 year-old girl named Monelle. Impressed by her talent, Gérard decides to adopt Monelle as his protégé, but very soon his interest in her takes a less paternalistic turn. It is through a gossip magazine that Sylvia learns about her husband’s infidelity but she is uncertain how to react. After all, he did write a new song for her, “Lovers are alone in the world… END_OF_DOCUMENT_TOKEN_TO_BE_REPLACED 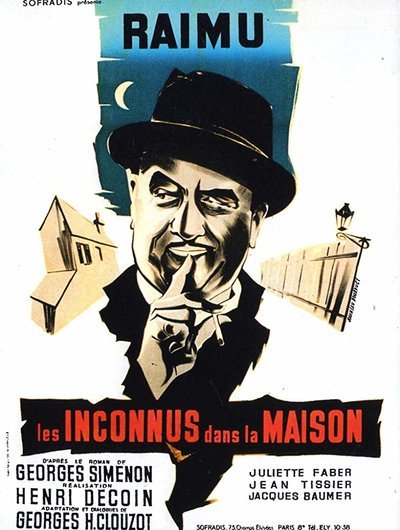 Georges Simenon’s 1940 novel Les Inconnus dans la maison is a brooding study in social breakdown and youth disaffection that contains a powerful critique of western society of the 1940s. The same can equally be said of Henri Decoin’s magnificent film adaptation, one of the earliest and most successful attempts to bring Simenon’s bleak, melancholic world to the big screen. This was the second film that Decoin made for the German-run film company Continental-Films during the Nazi Occupation of France and it could hardly be more different in tone and subject from his first, the American-style romantic comedy Premier rendez-vous (1941). END_OF_DOCUMENT_TOKEN_TO_BE_REPLACED

Director Henri Decoin and actress Danielle Darrieux made many fine films together (Le Domino vert, Abus de confiance, La Vérité sur Bébé Donge), but few are as charming and funny as the romantic comedy Battement de coeur. Thanks to its prestigious cast, witty dialogue and abundance of comic situations, this fifth Decoin-Darrieux offering is a delight. It was also the last film they made together before their divorce the following year, although they remained friends afterwards and worked together on four subsequent films. END_OF_DOCUMENT_TOKEN_TO_BE_REPLACED

Synopsis
The Marquise de Montespan is a scheming adventuress who hopes to become the favoured mistress to King Louis XIV of France to advance her social status. However, she is thwarted by the young Angélique de Fontanges, who is the King’s current favourite. Out of desperation, the Marquise de Montespan engages the services of a professional poisoner, the venomous La Voisin, to render her rival ugly. The potion unfortunately kills the young Angélique, and the royal court is thrown into turmoil… END_OF_DOCUMENT_TOKEN_TO_BE_REPLACED

Synopsis: Paris 1943. After her husband’s death, killed by the Germans, Cora joins the résistance under the pseudonym “La Chatte” (the she-cat). Very skillfully she succeeds in a dangerous mission. The same evening she meets a Swiss journalist, Bernard, and falls in love with him. Bernard is a German officer who now has to decide between his love for Cora and his mission. END_OF_DOCUMENT_TOKEN_TO_BE_REPLACED

Henri Decoin – Bonnes à tuer AKA One Step to Eternity (1954)

Synopsis:
‘François Roques, a power-and-money-mad editor of a Paris newspaper (who justifies his actions by calling attention to his poverty-stricken childhood), invites four women to a housewarming at his penthouse apartment. He plans on one of them to meet death by means of a loose railing on the balcony. The invitees are: Constance, François’ first wife, whose love and integrity also stood in the way of his schemes; Véra Volpone, his second wife, from whom he is seeking a divorce, and who, with the aid of her lover, is blackmailing François; Maggy, his mistress who aids him in his illegal transactions; and Cécile, his fiancée, who is pregnant by another man. The women arrive, tension overwhelms them and the host, three of the women depart…and Francois is alone with his intended victim.’
– Les Adams END_OF_DOCUMENT_TOKEN_TO_BE_REPLACED

Quote:
In the forties and the fifties,Henry Decoin’s forte was the film noir:”non coupable” which remains ignored today might be his masterpiece,but there are other interesting works such as “la vérité sur Bébé Donge”or “les inconnus dans la maison” .The almost documentary approach of “Razzia sur la chnouff” (about drugs) seems modern even today.And some works which are difficult to see (“Maléfices” “Bonnes à tuer” and “tous peuvent me tuer” probably deserve to be watched). END_OF_DOCUMENT_TOKEN_TO_BE_REPLACED