The painter Picasso awakes from the dead, steals one of his paintings from a psychiatrist’s and his wife’s kitchen and wanders through Munich, where he meets the psychiatrist’s patient, Takla Bash, and falls in love with her. Ignoring that she is actually his daughter he plans a phenomenal love affair including a film about a blue cow. This surreal film includes many of director/writer/star Herbert Achternbusch’s own paintings. END_OF_DOCUMENT_TOKEN_TO_BE_REPLACED

Synopsis
[In Hick’s Last Stand] we witness yet another incarnation of a Last Bavarian Mohican, incoherently staggering across the badlands of South Dakota and Wyoming in white cowboy boots, black leather jacket, and a feather on his hat. Without dialogue, without other players besides Herbert Achternbusch, and with the most minimal narrative progression, the film consists only of an image track over which we hear Hick’s extended monologue, a declaration of love to the absent Mary, occasionally interrupted by songs by Judy Garland, Native American chants, and classical music. END_OF_DOCUMENT_TOKEN_TO_BE_REPLACED

Synopsis
In Achternbusch’s first feature, an anxious teacher (played, as is the lead role in all his films, by the director) sits in a beer garden on the hill of the Andechs monastery. While flies drown in his mug of beer, he confronts a life of failure: the wife he ignored, the child he neglected, the teaching duties he has shirked, and his doomed efforts at winning tenure from school officials. Only a dream from the past – the memory of a former liaison with a film star with whom he shared “the Andechs feeling, a feeling that we are not alone”, provides sustenance. Despite an unexpected series of events, longing in Achternbusch’s world ultimately remains stronger than fulfillment and thirst better than beer. END_OF_DOCUMENT_TOKEN_TO_BE_REPLACED 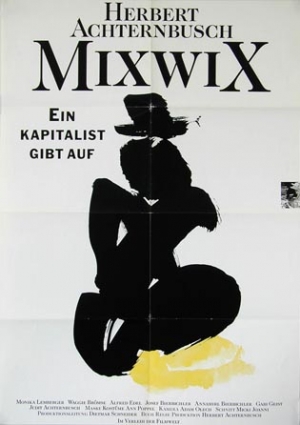 He has long been the king of underpants and socks. He even has the largest selection of underpants ever. Mr. Mixwix is a department store owner and so successful with his underpants and socks that something new has to come, something that stimulates him again, lets him continue. Tennis clothing, for example! Or maybe not? While Mr. Mixwix, quiet as Buddha, sits high above the rooftops of Munich and waits for the building permit for the extension of his department store for tennis clothing, he ponders whether he is on the right track with tennis clothing, or whether he is on the right track at all, and what the right track is in the first place. This immersion in Far Eastern life wisdom, the questioning of his own existence as a big capitalist and of capitalism itself, lead Mr. Mixwix to all sorts of philosophical and peculiar games of thought, but also to statements such as: “How can one be as inspirited by one’s own stupidity as the Bavarian people”. END_OF_DOCUMENT_TOKEN_TO_BE_REPLACED 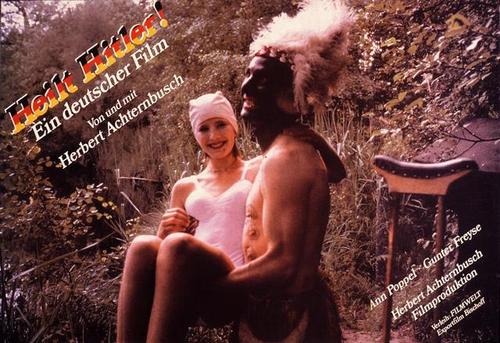 Herbert in plaster
In the films of Herbert Achternbusch the plot is more of a space in which the Bavarian filmmaker, poet and painter improvises. For example as artist and soldier Herbert in Heilt Hitler!, which premiered 25 years ago at the Berlinale. At night Herbert sits with his last comrade in the trenches of Stalingrad. While his comrade is writing with his finger one last letter to the Fuehrer into the air, Herbert starts to plaster himself with the last bucket of plaster, so the Russians find only a statue. Suddenly Herbert finds himself in the Munich of the eighties. At the war memorial in Munich’s Hofgarten is written “They will rise again”. That’s the miracle of Stalingrad. Herbert does not know where he is and tries to scrounge cigarettes, in Russian. Maybe the Germans have won the war, have rebuilt Stalingrad after the model of Munich and renamed it Hitlergrad. On the Munich Marienplatz and Lake Starnberg Herbert observes that all Germans are sick. Like Hitler: “No one is healed.” Heilt Hitler! is an absurd farce, shot in eleven days in Super-8 and blown-up to 35 mm, a histrionic, avant-garde artist’s film with wonderful monologic passages, where Achternbusch’s later conversion to Buddhism is already indicated.
Detlef Kuhlbrodt in DIE ZEIT, 7th July 2011 END_OF_DOCUMENT_TOKEN_TO_BE_REPLACED