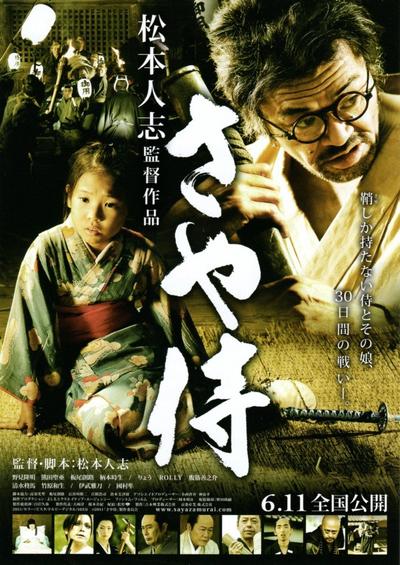 Recently widowed samurai Kanjūrō (Nomi Takaaki) puts down his sword and abandons his master, with nine-year-old daughter Tae (Kumada Sea) in tow. Now wanted for desertion, Kanjūrō is captured by a rival lord (Kunimura Jun), who makes an unusual offer. Kanjūrō will be released if he can bring a grin to the lord’s son (Shimizu Shūma), who hasn’t smiled since his mother’s death. If Kanjūrō can’t succeed within thirty days, he must commit seppuku. With the help of his jailers — and some harsh reinforcement from his daughter — the humorless Kanjūrō devises comically desperate (or desperately comic) methods to save his skin and crack the son’s stony exterior. Though more sentimental than writer/director Matsumoto Hitoshi’s previous films (Big Man Japan, Symbol), Scabbard Samurai is unmistakably in the same spirit, with deadpan absurdism and bizarre stunts recalling the variety shows that made his name.) END_OF_DOCUMENT_TOKEN_TO_BE_REPLACED