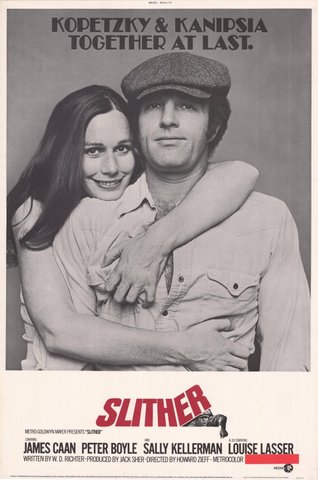 In Slither, James Caan plays Dick Kanipsia, a recently paroled car thief whose plans to go straight are interrupted when his best pal Harry Moss (Richard B. Schull) is shot and killed. As he lies dying, Moss advises Kanipsia to seek out fellow crook Barry Fenaka (Peter Boyle), who knows where a huge amount of money stolen by Moss is hidden. Aware that he himself is a marked man, Kanipsia has to play it cool en route to Fenaka. This proves difficult when his erstwhile travelling companion, dopehead Kitty Kopetzky Sally Kellerman, robs a roadside diner in his presence. Since nothing is ever quite what it appears to be in Slither, perhaps we shouldn’t tell you any more. This truly serpentine tale served as the feature-film directorial debut of Howard Zieff, the former TV-commercial helmsman responsible for the famous Spicy Meatball ad.
END_OF_DOCUMENT_TOKEN_TO_BE_REPLACED