Narrated by Shirley MacLaine
User Commentary From IMDb.com:
Exceptional documentary about a singular actress
“Louise Brooks: Looking for Lulu” is an exceptionally well-crafted and emotionally moving documentary. It is one of the best film documentaries I have ever seen. Barry Paris (author of the definitive biography of the actress) has written a masterful, sympathetic script. And director Hugh Munro Neely has fashioned a well-researched, balanced and finely documented study of this 20th century icon. END_OF_DOCUMENT_TOKEN_TO_BE_REPLACED 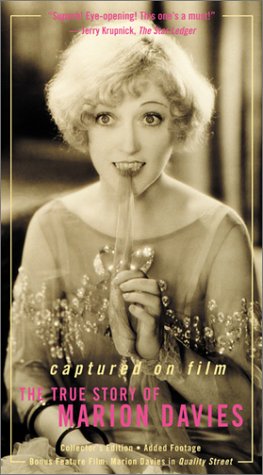 “Narrated by actress Charlize Theron, Captured on Film: The True Story of Marion Davies (2001) is a documentary about the Hollywood legend whose acting career was overshadowed by her much-criticized love affair with newspaper magnate William Randolph Hearst. The film features the final on-camera interview with Davies’ biographer Fred Guiles as well as interviews with film historians Kevin Brownlow, Jeanine Basinger, and Cari Beauchamp; former film critic Charles Champlin; and actress Virginia Madsen, who researched Davies for her portrayal of the star in the made-for-TV movie The Hearst and Davies Affair (1985). First-hand accounts of events in Davies’s life will be shared by Carl Roup, a studio newspaper boy who was chosen by Davies to appear as an extra in The Red Mill (1927); Davies’s friends, including actress Constance Moore and King Vidor’s daughter, Belinda Vidor Holiday; and Life magazine correspondent Stanley Flink, who taped interviews with Davies in 1951, excerpts which are heard in the documentary. END_OF_DOCUMENT_TOKEN_TO_BE_REPLACED