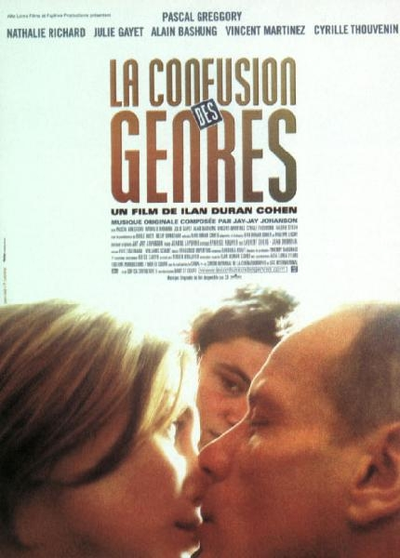 SYNOPSIS
This sexy and funny story of a fortysomething guy who wants to fall in love with a woman, but shares his bed with twentysomething guy just may open your mind.

Author, filmmaker and NYU film school graduate Ilan Duran Cohen’s second feature, Confusion of Genders, is both explicit and restrained, sexy and sublime, gay and straight, its appeal and theme of a man’s inability to grow up is unquestionable and broad. Pascal Greggory (an award winner for his performance in Those Who Love Me Can Take the Train) plays Alain, a fortyish lawyer who was once an ugly duckling. Now he’s capable of charming anyone and, like a honeybee hovering over a garden of pretty flowers, can’t decide which to sup from first, next, or last. There’s Laurence (Nathalie Richard), a peer at his law firm, whom Alain recently got pregnant and reckons he should marry; Christophe, the frisky, gay younger brother of another ex-girlfriend; the obsessed, incarcerated, but sexy client, Marc; and Marc’s entrancing hairdresser girlfriend, Babette. “The only person he has yet to charm is himself,” Duran Cohen has remarked. END_OF_DOCUMENT_TOKEN_TO_BE_REPLACED