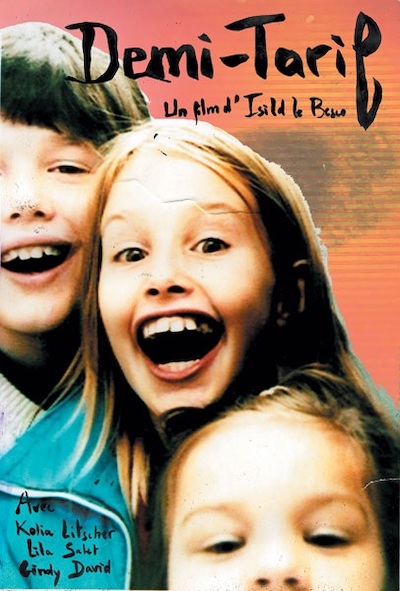 Actress Isild Le Besco (Girls Can’t Swim) makes her feature debut as a director with Demi-Tarif (Half-Price). The movie, shot on digital video on a miniscule budget, garnered attention in its native France after renowned filmmaker Chris Marker compared the experience of seeing it to the experience he and his friends had upon seeing Jean-Luc Godard’s Breathless for the first time. Demi-Tarif follows the low-key adventures of three young siblings, Romeo (Kolia Litscher), Launa (Lila Salet), and the youngest, Leo (Cindy David), left on their own in a rundown Paris apartment. One of them narrates, wistfully explaining how their mother abandoned them and calls them once in a while to see how they are doing or tell them she loves them. The three kids do as they please, roaming the streets, running out of restaurants without paying for food, and shoplifting from the local grocery store. They eat whatever and whenever they want, gorging themselves on sweets. They beg for change on the Metro and show up late for school in tattered, dirty clothes. All the while, they try to keep the fact that they are alone a secret from the world of adults. Demi-Tarif had its U.S. premiere at the 2004 Tribeca Film Festival. END_OF_DOCUMENT_TOKEN_TO_BE_REPLACED

Tramping toward the sea, 14-year-old Nicolas crosses paths with Charly, a tough girl who takes him into her mobile home, where an unusual domestic arrangement evolves. As in her brilliant debut ½ Price, Le Besco movingly depicts a world without adults. END_OF_DOCUMENT_TOKEN_TO_BE_REPLACED