Quote:
Jacques Audiard made his directorial debut in a spectacular fashion with Regarde les hommes tomber, one of the most visually striking and disturbing French thrillers of the 1990s. The son of the acclaimed French screenwriter Michel Audiard, he had scripted several films (going back to the mid-1970s) before he gravitated to the role of director and pretty well redefined the French film noir with this and his subsequent thriller offerings – Sur mes lèvres (2001), De battre mon coeur s’est arrêté (2005) and, of course, the stunning Un prophète (2009). Those aspects which most characterise Audiard’s distinctive brand of cinema – the nihilistic bleakness, the fragmented narrative, the assortment of fragile outcasts living on the abyss – are present in his first film, an idiosyncratic study in solitude and friendship. END_OF_DOCUMENT_TOKEN_TO_BE_REPLACED

Quote:
Based on Craig Davidson’s short story collection of the same name, Jacques Audiard’s Rust and Bone (De rouille et d’os, 2012) is a tender, yet visceral piece about the nature of being human. Starring Marion Cotillard as young amputee Stéphanie, and Matthias Schoenaerts as troubled single father Ali, Audiard’s latest may boast incredibly moving performances, but never quite grants us the ability to truly get under the main protagonists’ skin. After returning orca trainer Stéphanie home following a nightclub brawl, burly bouncer Ali finds himself once again aiding the woman – four months after she suffers a terrible accident. END_OF_DOCUMENT_TOKEN_TO_BE_REPLACED

Synopsis
Malik El Djebena is just 19 when he is sent to prison for six years. Immediately, he falls in with a group of Corsican prisoners who rule the roost. From his experiences with these hardened criminals, Malik learns some invaluable lessons and sets about building his own network… END_OF_DOCUMENT_TOKEN_TO_BE_REPLACED

Twenty-eight-year-old Tom leads a life that might be termed as criminal. In doing so, he follows in the footsteps of his father, who made his money from dirty, and sometimes brutal, real estate deals. Tom is a pretty hard-boiled guy but also strangely considerate as far as his father is concerned. Somehow he appears to have arrived at a critical juncture in his life when a chance encounter prompts him to take up the piano and become a concert pianist, like his mother. He senses that this might be his final opportunity to take back his life. His piano teacher is a Chinese piano virtuoso who has recently come to live in France. She doesn’t speak a lick of French so music becomes the only language they have in common. Before long, Jacques’ bid to be a better person means that he begins to yearn for true love. But, when he finally has the chance of winning his best friend’s wife, his passion only succeeds in scaring her. And then, one day, his dubious past comes to light… END_OF_DOCUMENT_TOKEN_TO_BE_REPLACED 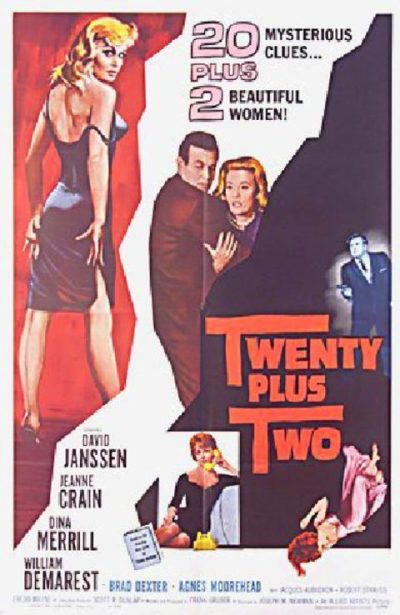 IMDB:
The plot of this near-noir is very convoluted, but the director keeps a steady pace and there is enough incidental interest to avoid confusion or boredom. When a Hollywood secretary is found murdered, Tom Alder (Janssen), a “finder of missing persons”, is hired to investigate the murder, but quickly sees a link between the secretary and a the long-missing daughter of a wealthy family. Complications involve some colorful characters: Leroy Dane (Brad Dexter), a big movie star, Mrs Delaney (Agnes Moorehead) the missing girl’s mother, Jacques Pleschette (Jacques Aubuchon) a shady figure who tries to hire Tom to find his missing brother. All these actors give top drawer performances, with Moorehead a standout for the way she takes complete control of her single scene with Janssen. Excellent too is Dina Merrill as Nikki (her Tokyo-set flashback with Janssen is quite impressive). Also fine in the cast are Jeanne Crain, Robert Strauss, and William Demarest, doing a convincing turn as a down-and-out drunken newspaper man. END_OF_DOCUMENT_TOKEN_TO_BE_REPLACED