Quote:
Escaping from a policeman who has caught h.im with a stolen dog, Toto (Albert Préjean), a petty crook, hides in the apartment of a typist, Ginette (Renée Saint-Cyr). The two quickly fall in love, and after a brief incarceration, Toto returns to her and schemes to have her win a beauty contest. Bruno, a “financier” who met Toto in prison, briefly comes between the couple, but they are reunited at the end. END_OF_DOCUMENT_TOKEN_TO_BE_REPLACED

A young Canadian nurse (Betsy) comes to the West Indies to care for Jessica, the wife of a plantation manager (Paul Holland). Jessica seems to be suffering from a kind of mental paralysis as a result of fever. When she falls in love with Paul, Betsy determines to cure Jessica even if she needs to use a voodoo ceremony, to give Paul what she thinks he wants. END_OF_DOCUMENT_TOKEN_TO_BE_REPLACED

A “Crime Doesn’t Pay” morality drama about a young man sentenced to a prison term and attempts by the system to rehabilitate jailed criminals. END_OF_DOCUMENT_TOKEN_TO_BE_REPLACED 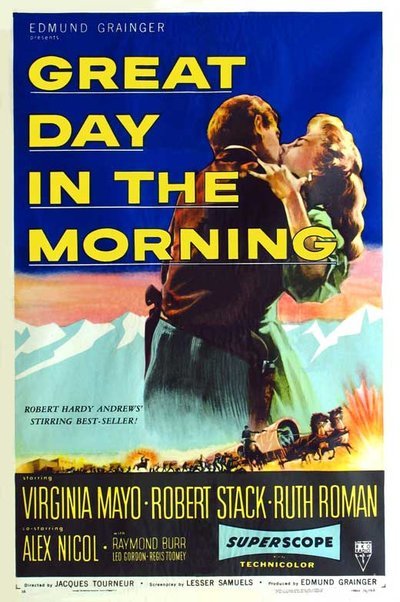 Film Society of Lincoln Center Writes:
Tourneur’s moral and aesthetic complexity elevates this dark, anti-heroic western. Set on the brink of the Civil War, the deceptively titled Great Day in the Morning stars Robert Stack as a smooth-talking, opportunistic Southerner who drifts into Denver, his presence inflaming the already heated tensions between the Yankees and Confederates—and between two women he caddishly pursues, played by Virginia Mayo and Ruth Roman. As the film circles around themes of greed, jealousy, and violence, its increasingly sinister tone is mirrored by Tourneur’s intricate mise en scène, which begins in soft pastel hues and ends in noir shadows. END_OF_DOCUMENT_TOKEN_TO_BE_REPLACED

from Film Society of Lincoln Center:
Money, sex, and football: the three cornerstones of American life spell doom in Tourneur’s tough, subversive anti-marriage melodrama. Victor Mature is a star quarterback with a fatal heart condition who’s willing to risk death on the field to give his power-hungry wife (Lizabeth Scott) the life she wants, even as she pursues a sordid affair with a Wall Street sugar daddy. Co-starring Lucille Ball—who delivers some of the film’s most memorable moments as a hard-nosed working girl spouting world-weary cynicisms—Easy Living is a Sirkian sports movie with a dark noir undercurrent. END_OF_DOCUMENT_TOKEN_TO_BE_REPLACED

Fred Camper wrote:
This 1957 noir masterpiece by Jacques Tourneur stars Aldo Ray as a man fleeing a private investigator and Anne Bancroft as the barroom acquaintance who agrees to help him. Ray’s past is revealed gradually in a series of flashbacks, which are intercut with the couple’s flight and the investigator’s pursuit; by developing each narrative in a parallel space or time, Tourneur movingly articulates the theme of a character trapped by his history. The images have a smooth, almost liquid quality, the high-contrast lighting of most noirs replaced by a delicate lyricism that takes the natural world as the norm. Tourneur links this naturalism to Ray’s growing observational skills (“I know where every shadow falls,” he says), but it also contrasts with the story’s acute paranoia. END_OF_DOCUMENT_TOKEN_TO_BE_REPLACED