Filmed at Benning’s home in Val Verde during the first month of the pandemic, the film is a portrait of that time. END_OF_DOCUMENT_TOKEN_TO_BE_REPLACED

Two people watch a film being broadcast on Telemundo, a Spanish-language television station. The sound of the film along with commercials can be heard. They occasionally talk to each other, but never about the film. END_OF_DOCUMENT_TOKEN_TO_BE_REPLACED

Quote:
“Legendary avant-garde filmmaker and visual artist James Benning returns to the Festival with L. COHEN, one of the year’s most awe-inspiring and transcendent experiences. Benning has described the landscape as ‘a function of time’ and this film elegantly invites us to savour the relationship. Shot in a barren Oregon field, the film’s fixed camera presents us with the deceptively simple: canary-coloured jerry can, twin tires, some rusty barrels, abandoned agricultural machinery, a plain of green grass and overgrown hay, and faint, portentous details in the distance. END_OF_DOCUMENT_TOKEN_TO_BE_REPLACED

Synopsis by Mark Peranson (cinema-scope):
James Benning is not quite Stravinsky, and his first high-definition video (and first film shot outside the US) is not exactly the Rite of Spring, but a trip to the heart of the Ruhr Valley for the premiere of Ruhr at the Duisberg Film Week carried a certain nervous anticipation. After years of shooting on 16mm and finally abandoning it for HD because of an endless series of processing and projection errors, Benning was about to enter further unexplored territory: digital projection. END_OF_DOCUMENT_TOKEN_TO_BE_REPLACED 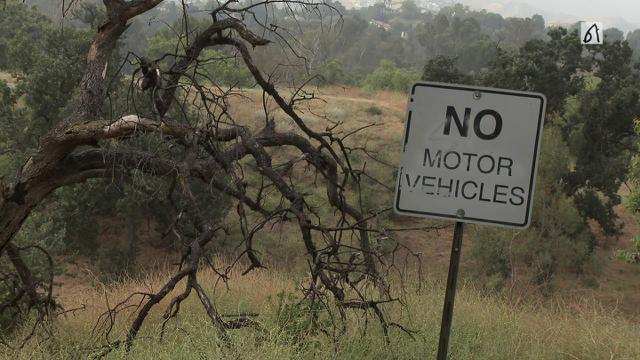 “A portrait of an art institution as a cinematic landscape: in a succession of static shots, James Benning explores the buildings and terrain of the California Institute of the Arts, where he teaches. A series of views of nature filmed in the surrounding park and woods transitions into images of floors, seating areas and other details of a public building not meant for show. In both parts, an uncanny feeling dominates: the geometries of nature, the dark green and brown tones, the rushing of the highway in the background on the one hand and the humming of halogen lamps, the sound of steps in an otherwise seemingly empty school on the other – it all seems to be hiding a secret. END_OF_DOCUMENT_TOKEN_TO_BE_REPLACED

Quote:
Employing natural sound and contemplative proscenium shots, Benning skillfully composes a series of pure and majestic images that at once evoke a sense of nostalgic splendor as well as deliver a subtle, yet penetrating, political commentary. Benning tells the story of how water irrigates this valley and how the produce is carted away in boxcars for the nation’s consumption. He shows the lifestyle of a modest and growing rural community, whose concerns are often drowned out by the powerful railroads, oil companies and insurance conglomerates which own the farms and ranches and benefit from undocumented immigrant labor while insisting on imprisoning an American population of color. END_OF_DOCUMENT_TOKEN_TO_BE_REPLACED

Quote:
I began El Valley Centro in November of 1998; I was driving through the Great Central Valley looking for places to film. I wasn’t going to start shooting for at least six months; I wanted to just look and listen – to get to know the Valley well before I would make images. But almost immediately I came across an oil well fire with flames high into the sky. I returned home for my Bolex and Nagra. Determined that landscape is a function of time, I let a full roll of 16mm film (100 feet) run through the camera. At that moment I knew I would make a portrait of The Great Central Valley using 35 two and a half minute shots. END_OF_DOCUMENT_TOKEN_TO_BE_REPLACED