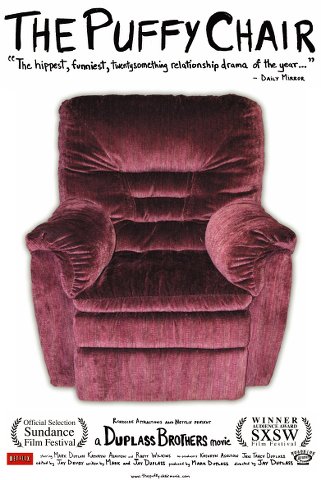 From Time Out London
‘I’ve got about 50 fuckin’ thoughts and strategies about how some shit is and I don’t know fuckin’ shit.’ Such is the lament of Josh (Mark Duplass, who co-wrote the script with director brother Jay), a would-be indie rocker turned booking agent adrift in an indefinite state of petulant post-adolescence. Josh leads his doormat girlfriend, Emily (Kathryn Aselton), and his hippy-dippy brother, Rhett (Rhett Wilkins), on a quest to retrieve an eBay purchase: the titular piece of furniture, seemingly identical to one from Josh’s youth, and therefore a big red hint about the approximate end-point of everyone’s emotional development. Holding up a mirror to slacker-manqué solipsism isn’t necessarily much more intriguing than the thing in itself, but the Duplass brothers are merciless in digging pot holes and contriving road blocks for the claustrophobic, infuriating road trip that ensues. Josh and Emily’s curdled intimacy rings painfully true, and a memorably aborted dinner early on rhymes with the film’s perfectly abrupt ending; when everyone finally shuts up, the silence is startling. END_OF_DOCUMENT_TOKEN_TO_BE_REPLACED