The “white paws” of this noirish melodrama are the gaudy white spats sported by a reclusive French aristocrat in a fishing village on the coast of Normandy. Scripted by French playwright Jean Anouilh, who was originally to have directed it, Pattes blanches was ultimately brought to the screen by Grémillon, who accepted the project after the commercial failure of his Le ciel est à vous. The moody plot concerns the relationship of the aristocrat (Bernard) and his vengeful half-brother (Bouquet) and their rivalry over a promiscuous flirt from the city (Delair) who has married the local innkeeper. Although produced within the framework of the commercial cinema, Grémillon’s film manages to imbue the melodrama with a sharp sense of class divisions and his characteristic visual harmonies. (Harvard Film Archives) END_OF_DOCUMENT_TOKEN_TO_BE_REPLACED

Considering that it was made during a bleak and distressing period for France, Le Ciel est à vous is an astonishingly uplifting film with a message of unfettered hope for the future. It is not difficult to read director Jean Grémillon’s allegorical call to arms behind the rather anodyne tale about a Lindbergh-esque exploit, based on the real-life story of Andrée Dupeyron, the wife of a garage owner in Mont-de-Marsan. Released in February 1944, a few months before the Liberation, the film was enormously popular in France, galvanising the efforts of the Resistance and their covert supporters with its inspiring subtext. Although Jean Grémillon would go on to make three more notable films, Le Ciel est à vous was his last commercial success, the highpoint of his career before a rapid decline into obscurity. END_OF_DOCUMENT_TOKEN_TO_BE_REPLACED

A lighthouse keeper and his son are stranded by the storm in a lighthouse. END_OF_DOCUMENT_TOKEN_TO_BE_REPLACED

Quote:
Recently restored (in 2001) by Centrimage for ZZ Productions, Maldone is one of the great achievements of French silent cinema. It was the first genuine masterpiece from Jean Grémillon and is also a very good example of the documentary style of film from this period. It was released in October 1928 but was not a great success, bringing and end to Charles Dullin’s film production ambitions (Dullin also stars in the film as Maldone). END_OF_DOCUMENT_TOKEN_TO_BE_REPLACED

Quote:
Marie Prieur, a young doctor, decides to settle down on Ushant, a remote island belonging to Brittany. Little by little she manages to be accepted by the population. One day she meets André Lorenzi, a handsome engineer, and it is love at first sight. Life is wonderful for a while but André wants to marry her only if she remains at home. Despite her strong feelings for André, Marie refuses to give up her vocation and the two lovers part. Marie finds herself alone, with a broken heart. END_OF_DOCUMENT_TOKEN_TO_BE_REPLACED 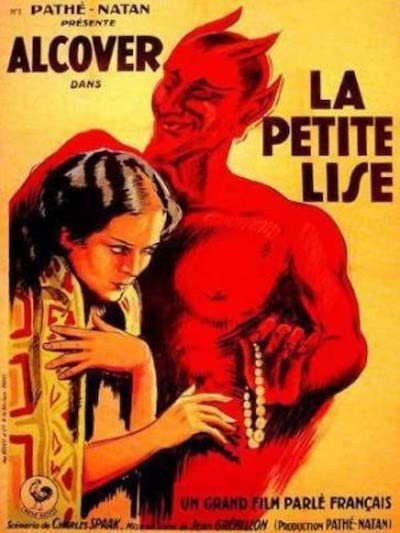 Jean Grémillon’s first talkie, the 1930 LA PETITE LISE, is anything but talky. While opening
and closing with soulful afro-Latin strains, something just above silence reigns throughout
the film. Grémillon is already orchestrating the auditory menace of nuanced sound sculpting
that would later pervade REMORQUES (1941), setting forth evolving rhythmic figures at an
atmospheric whisper. Grémillon grafts this aural frieze onto smoldering b&w photography.
Truly, the frame is often smoking for purposes of motif.
In truth, this film has the most impressive use of sound I know of, including Bresson’s
MOUCHETTE. END_OF_DOCUMENT_TOKEN_TO_BE_REPLACED

Gueule d’Amour
Made partly while Grémillon was working at the Ufa Studios in Berlin, this film features the young Jean Gabin as a foreign-legion Casanova – the “lady killer” Lucien Bourrache – who meets his match in the mysterious seductress Madeleine (Mireille Balin). The sizzling electricity between Gabin and Balin made Gueule d’amour a rare popular success for the director. END_OF_DOCUMENT_TOKEN_TO_BE_REPLACED