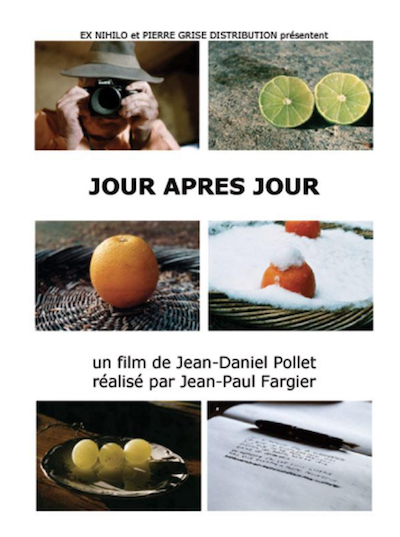 The film is based on the pictures Jean-Daniel Pollet took before dying for an entire year, day by day. The film recounts the filmmaker’s life as he saw it through his camera lens. Extremely debilitated from being hit by a train in 1989, in 2001 he retired to his farmhouse photographing the now more restricted world around him. Jean-Paul Fargier has tried to uses these images, interwoven with footage of moments spent with his friend, to create a piece about this artist and to render as faithfully as possible the feelings that drove him. “When he ordered the text from me, Jean-Daniel only imposed two words: anxiety and serenity. I understood that he spoke of his own anxiety, his own serenity, his life approaching its end, his work about to reach an abrupt conclusion. It is with those two words, as I heard them that I worked out the text, as Pollet’s confession.” (J. P. Fargier) END_OF_DOCUMENT_TOKEN_TO_BE_REPLACED