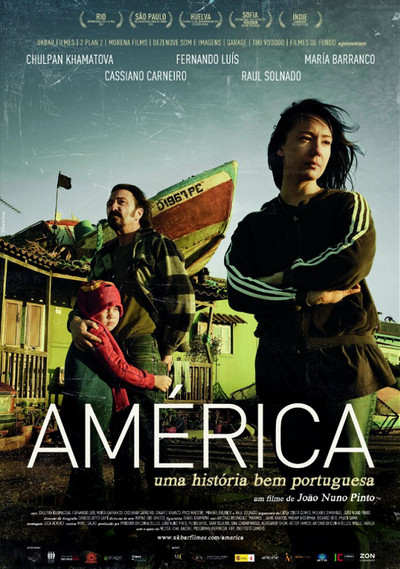 Quote:
America a tragic story told in a burlesque and ironic way, within a love triangle. Liza, a beautiful young Russian woman, is married to Victor, a small-time crook who lives on scheming and swindling, born and bred in Portugal. Fernanda, the ex wife, who ten year’s passed decides to drop by, is the gang leader, an Andalusian Spaniard. Victor has to decide which women to follow, Liza cannot really leave him, Fernanda doesn’t really want to stay. The six year old kid hangs everybody by a string. Eastern European newcomers give new business perspectives that are going to rock their small world by the beach: Cova do Vapor. A chaotic neighborhood of precarious housing located at Lisbon’s gates, where the Tagus River meets the Atlantic, where fishermen and retired factory workers coexist. An obscure little place, where everything suddenly changes, even the weather. After a violent storm, the gangster’s house gets a rusted fishing boat hanging on top of their home. In the midst of the tragedy, there’s always room for love, and most of all, hope for a piece paper called passport, sometimes fake! END_OF_DOCUMENT_TOKEN_TO_BE_REPLACED