Synopsis:
‘Sabotage of a Nazi factory is carried out by the husband of the lover of a resistance leader.’
– BFI END_OF_DOCUMENT_TOKEN_TO_BE_REPLACED

Johan Jacobsen – Soldaten og Jenny AKA Jenny and the Soldier (1947)

A good natured soldier with a killer right hand, falls in love with a beautiful girl who has a troubled past. END_OF_DOCUMENT_TOKEN_TO_BE_REPLACED 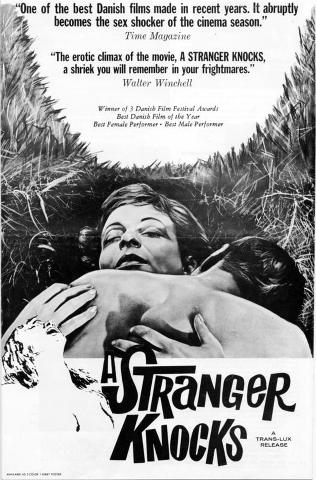 Amos Vogel in Film as a Subversive Art:
A censorship landmark case: the entire plot pivots on an act of intercourse, during which the woman accidentally discovers the vital clue to the film’s mystery. The complete absence of nudity and total relevance of the scene to the plot posed an impossible problem for the American censors, and led, upon appeals against its prohibition, to the abolition by the Supreme Court of the entire system of American state censorship in 1967. This development contributed significantly to the later era of sexual permissiveness in the American cinema. END_OF_DOCUMENT_TOKEN_TO_BE_REPLACED