Synopsis:
The final film of stars Clark Gable and Marilyn Monroe is an elegy for the death of the Old West from writer Arthur Miller and director John Huston. Gable stars as Gay Langland, an aging hand traveling the byways and working at rodeos with his two comrades, Guido (Eli Wallach) and young Perce Howland (Montgomery Clift). The three men come up with a plan to corral some misfit mustangs and sell them for dog food, but Gay’s new girlfriend Roslyn Taber (Marilyn Monroe), a high-minded ex-stripper who has just divorced her husband Ray (Kevin McCarthy) in Reno, is appalled by the plan. Although both Guido and Perce are also in love with Roslyn, she stands by Gay, sure that in the end he will do the right thing, even as he and his pals begin their planned roundup.
— Karl Williams END_OF_DOCUMENT_TOKEN_TO_BE_REPLACED

Berkeley Art Museum / Pacific Film Archive writes:
Hailed as John Huston’s “comeback” film in 1972, Fat City is a film that deserves to come back more often. Based on a novel by Leonard Gardner, who also wrote the screenplay, and photographed by the excellent Conrad Hall (In Cold Blood), it is a portrait of the seedy, small-time boxing milieu of Stockton, CA. (“Huston is in his element here,” Andrew Sarris wrote, “simply because his realistic affectations have always been merely a cover and an alibi for his romantic affection for the compulsive losers of this world.”) The losers in Fat City are two prizefighters (Stacy Keach and Jeff Bridges), a sherry-drinking barfly (Susan Tyrrell), her jailed and released black lover (Curtis Cokes), and assorted fight managers, boxers, lettuce pickers, bartenders and countermen… END_OF_DOCUMENT_TOKEN_TO_BE_REPLACED

Synopsis:
Spade and Archer is the name of a San Francisco detective agency. That’s for Sam Spade and Miles Archer. The two men are partners, but Sam doesn’t like Miles much. A knockout, who goes by the name of Miss Wonderly, walks into their office; and by that night everything’s changed. Miles is dead. And so is a man named Floyd Thursby. It seems Miss Wonderly is surrounded by dangerous men. There’s Joel Cairo, who uses gardenia-scented calling cards. There’s Kasper Gutman, with his enormous girth and feigned civility. Her only hope of protection comes from Sam, who is suspected by the police of one or the other murder. More murders are yet to come, and it will all be because of these dangerous men — and their lust for a statuette of a bird: the Maltese Falcon. END_OF_DOCUMENT_TOKEN_TO_BE_REPLACED

Synopsis:
A young woman, Stanley Timberlake, dumps her fiance, Craig Fleming, and runs off with her sister Roy’s husband, Peter Kingsmill. They marry, settle in Baltimore, and Stanley ultimately drives Peter to drink and suicide. Stanley returns home to Richmond only to learn that her sister Roy and old flame Craig have fallen in love and plan to marry. The jealous and selfish Stanley attempts to win back Craig’s affections, but her true character is revealed when, rather than take the rap herself, she attempts to pin a hit and run accident on the young black clerk, Parry Clay, who works in Craig’s law office. END_OF_DOCUMENT_TOKEN_TO_BE_REPLACED

Synopsis:
This classic story by Herman Melville revolves around Captain Ahab and his obsession with a huge whale, Moby Dick. The whale caused the loss of Ahab’s leg years before, leaving Ahab to stomp the boards of his ship on a peg leg. Ahab is so crazed by his desire to kill the whale, that he is prepared to sacrifice everything, including his life, the lives of his crew members, and even his ship to find and destroy his nemesis, Moby Dick. END_OF_DOCUMENT_TOKEN_TO_BE_REPLACED

Synopsis:
Rick Leland makes no secret of the fact he has no loyalty to his home country after he is court-martialed, kicked out of the Army, and boards a Japanese ship for the Orient in late 1941. But has Leland really been booted out, or is there some other motive for his getting close to fellow passenger Doctor Lorenz? Any motive for getting close to attractive traveler Alberta Marlow would however seem pretty obvious. END_OF_DOCUMENT_TOKEN_TO_BE_REPLACED 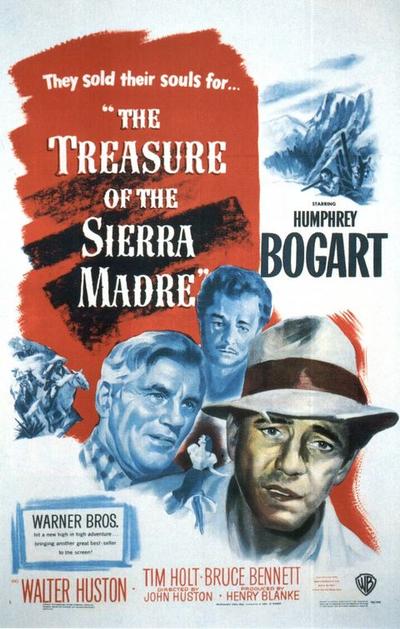 Humphrey Bogart plays Fred C. Dobbs, down-on-his-luck American in Mexico—he cadges the odd peso out of friendly passersby and countrymen, just so he can fill his stomach every now and again. He pals around with Curtin (Tim Holt), and after the two of them get cheated out of their wages by an American unethical even by the standards of this film, they exact their revenge, but their pockets are still empty. At the local flophouse, they overhear talk of an old codger called Howard (Walter Huston), who promises that in fact there is gold in them thar hills. If only they had enough scratch to buy the necessaries, they could be making themselves a fortune. END_OF_DOCUMENT_TOKEN_TO_BE_REPLACED