Sir Anthony Blunt was a Soviet agent in Britain for 25 years, the fourth man (after Maclean, Burgess and Philby) in the infamous Cambridge spy ring. Caught out in 1964, Blunt is granted immunity from prosecution and his treason is kept secret in exchange for a full confession. Meanwhile, he continues to work as an art historian, Director of the Courtauld Institute and Surveyor of the Queen’s Pictures. Continually hounded by MI5, he presents his interrogator with a puzzle in the shape of a doubtful Titian painting. He also does art restoration work in Buckingham Palace, where he gets into an ambiguous conversation with the Queen. Meanwhile the investigators demand that he disclose the name of the elusive Fifth Man in the ring as part of his immunity deal, otherwise threatening to expose him to the nation. END_OF_DOCUMENT_TOKEN_TO_BE_REPLACED

Synopsis:
John Schlesinger directs the war romance Yanks, based on the story by Colin Welland. Set in England at the end of WWII, the story concerns three American GIs and their affairs with British women of varying social status. The central romance concerns Sgt. Matt Dyson (Richard Gere) and Jean Moreton (Lisa Eichhorn making her film debut), who is the daughter of shopkeepers (Rachel Roberts and Tony Melody). He falls in love with her but she is still infatuated with her boyfriend Ken (Derek Thompson). Higher up on the class scale, the officer John (William Devane) has a brief extramarital affair with socialite Helen (Vanessa Redgrave). The third pairing involves Sgt. Danny Ruffelo (Chick Vennera) in a fling with Mollie (Wendy Morgan). END_OF_DOCUMENT_TOKEN_TO_BE_REPLACED Quote:
In 1969, following an anti-establishment path blazed famously by Bonnie and Clyde, then-X-rated Midnight Cowboy lumbered into the cinema consciousness and swiped the Best Picture Oscar. While Hollywood was producing Hello, Dolly! (also nominated that year), Dustin Hoffman, Jon Voight and director John Schlesinger were chronicling the bizarre tale of a wannabe male prostitute and a sickly cripple trying to survive together on the New York City streets. END_OF_DOCUMENT_TOKEN_TO_BE_REPLACED 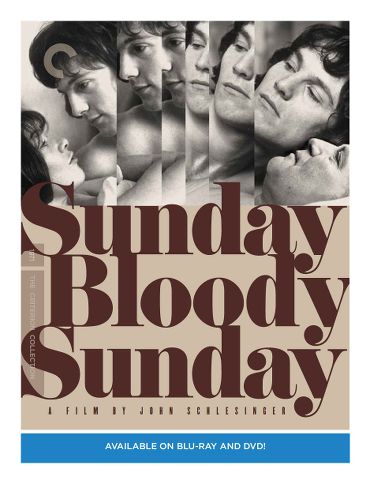 Quote:
John Schlesinger followed his iconic Midnight Cowboy with this deeply personal take on love and sex. Sunday Bloody Sunday depicts the romantic lives of two Londoners, a middle-aged doctor and a prickly thirtysomething divorcée—played with great sensitivity by Peter Finch and Glenda Jackson—who are sleeping with the same handsome young artist (Murray Head). A revelation in its day, this may be the seventies’ most intelligent, multitextured film about the complexities of romantic relationships.
— The Criterion Collection END_OF_DOCUMENT_TOKEN_TO_BE_REPLACED