Quote:
Two crooks flee in a stolen Ford Mustang. they have stolen it from the husband of the girl they rape in the forest. They take her with them to their refuge, a nice modern villa in the countryside. Here, their boss or protector is not so pleased with this girl: this was not planned. But his wife (the one with curly hair) is a lesbian, so she is very pleased with the girl, who has sex with everyone (the two crooks, the boss, his wife, her maid, the girlfriends of the crooks). At the end, the boss hires a killer, who kills the two crooks. And before we reach that scene, there is a long orgy scene with obsessive music, another surprising editing by Bénazéraf END_OF_DOCUMENT_TOKEN_TO_BE_REPLACED 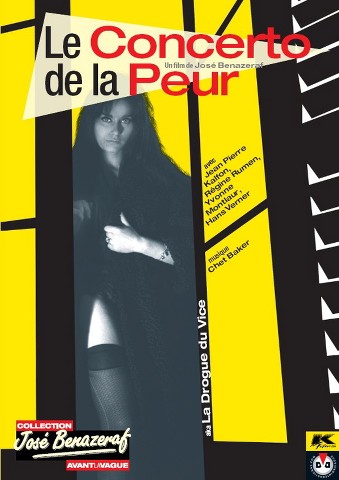 Kidnappings, murders and gang war for the control of a drug traffic…

There’s really a unique touch in those early Bénazéraf movies. You’re a bit somewhere between thriller, exploitation and Nouvelle Vague…
As I understood, the version released in the US already on the site is severely cut and suffers from a ludicrous English dubbing. The movie certainly deserves better than that… END_OF_DOCUMENT_TOKEN_TO_BE_REPLACED