Allmovie.com
Acclaimed Spanish filmmaker Julio Medem turns toward nonfiction to direct the documentary La Pelota Vasca: La Piel Contra la Piedra (The Basque Ball: Skin Against Stone). This controversial film is a look at the complicated situation between the Basque nationalist movement and the Spanish government. Medem interviews politicians, novelists, musicians, and over 70 other commentators in his efforts to explain both sides of the complex situation in the Basque Country of Northern Spain. Contains French, Castilian Spanish, and Basque languages. The Basque Ball was shown at the San Sebastian Film Festival, the Sundance Film Festival, and was nominated for a Goya award. END_OF_DOCUMENT_TOKEN_TO_BE_REPLACED

Tierra (Earth, Julio Medem, 1996) opens with a hypnotic journey through space, as the camera soars through the ethereal atmosphere, descending towards an agricultural area, then focusing in on a lone traveler who is having a motivational conversation with himself. A remote village has been infested with woodlice, imparting an earthy taste to the locally produced wine. An exterminator, a self-described “complex” man named Ángel (Carmelo Gómez), has been hired by the town mayor to fumigate the region. Ángel’s inner voice, the figurative angel of his subconscious who has died but continues to exist (and interject opinions) within his corporal self, believes that he has been sent down to earth for a divine mission. END_OF_DOCUMENT_TOKEN_TO_BE_REPLACED A hotel room in the center of Rome serves as the setting for two young and recently acquainted women to have a physical adventure that touches their very souls. END_OF_DOCUMENT_TOKEN_TO_BE_REPLACED 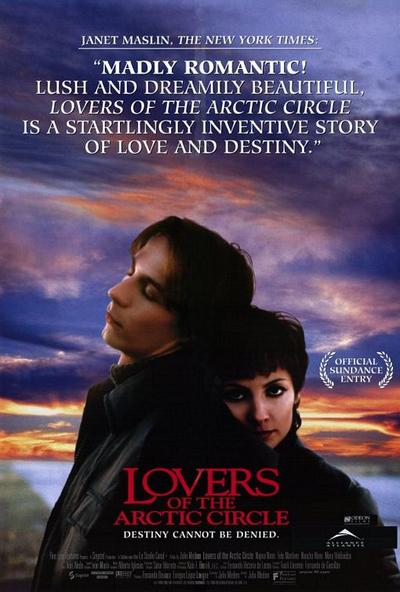 Quote:
As young children, Otto (Fele Martínez) and Ana (Najwa Nimri) become best friends, leading to the marriage of Ana’s mother, Olga (Maru Valdiviesio), to Otto’s father, Álvaro (Nancho Novo). When Otto and Ana become teenagers, they begin a sexual relationship, which they hide from their parents. The two fall deeply in love and seem destined to spend the rest of their lives together. However, their relationship is tested when Otto’s mother dies and the two are separated. END_OF_DOCUMENT_TOKEN_TO_BE_REPLACED