Playing on the legend of ghosts returning in the form of cats to seek vengeance for their deaths, Kuroneko [Black Cat from the Grove] tells the tale of a mother and daughter, raped and killed by marauding samurai, and their supernatural revenge. END_OF_DOCUMENT_TOKEN_TO_BE_REPLACED 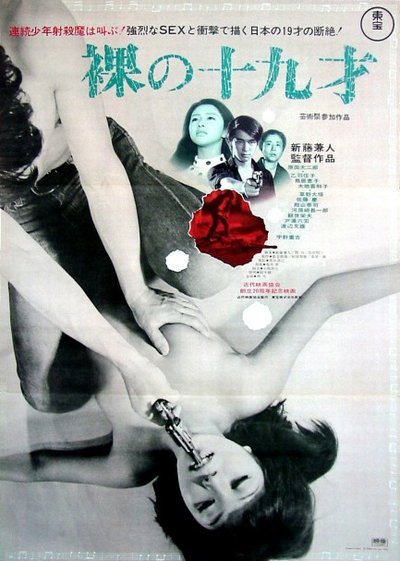 Quote:
Almost a decade before Imamura’s Vengeance Is Mine, Shindo crafted this fascinating documentary-inspired portrait of a serial killer that drew upon the actual events of a troubled nineteen-year old who went on a murderous rampage, killing four people with a pistol stolen from an US navel base. Shindo’s meticulous research into the background of the anti-social youth, including extensive interviews with his mother and acquaintances, brings a rare authenticity of unexpected detail to a film that also reads as an astute critique of American imperialism and reckless tabloid journalism. END_OF_DOCUMENT_TOKEN_TO_BE_REPLACED

Synopsis:
Toward the end of World War II, middle-aged soldier Keita is entrusted with a postcard from a comrade who is sure he will die in battle. After the war ends, Keita visits his comrade’s wife Yuko and bears witness to the tragic life she has led. This year’s Oscar entry from Japan finds SHINDO in top form and his 49th and reportedly last film as fresh and poignant as ever. END_OF_DOCUMENT_TOKEN_TO_BE_REPLACED

Synopsis:
In the Fourteenth Century, during a civil war in Japan, a middle-aged woman and her daughter-in-law survive in a hut in a field of reed killing warriors and soldiers to trade their possessions for food. When their neighbor Hachi defects from the war and returns home, they learn that their son and husband Kichi died while stealing supplies from farmers. Soon Hachi seduces the young widow and she sneaks out of her hut every night to have sex with him. When the older woman finds the affair of her daughter-in-law, she pleads with Hachi to leave the young woman with her since she would not be able to kill the warriors without her help. However, Hachi ignores her request and continues to meet the young woman. END_OF_DOCUMENT_TOKEN_TO_BE_REPLACED

Quote:
It is often said that comedy is the most untranslatable element from culture to culture. This is perhaps even more the case with surreal mixed genre films like this. In Shindo Kaneto’s film (his 101st!) the old sensei has given us a strange meditation on male lusts and women’s struggle for independence. It is like a play in that the action takes place almost exclusively in a small cabin in a deserted region of Western Japan. A mother and daughter are stranded in a ghost town and are starving to death. They hit on a plan to get them out of their plight which involves exploiting the few men who stray into their cabin. They offer sexual services and then bump off the happy customers. All goes well until a local cop shows up and, then, a relation of theirs from way back. END_OF_DOCUMENT_TOKEN_TO_BE_REPLACED

Quote:
Veteran Japanese filmmaker Kaneto Shindo was 82 when he directed this meditation on life, death, and loss. Following the passing of her husband, elderly former actress Yoko Morimoto (Haruko Sugimura) travels to her summer home in the mountains of Central Japan. Upon her arrival, her servant Tokoyo (Nobuko Otowa) has sad news for her — her long-time gardener has recently committed suicide. Adding to Yoko’s sorrow is the arrival of Tomie, an old friend from her days in the theater, who is traveling with her husband Tohachiro Urshikuni (Hideo Kanze), also an actor. END_OF_DOCUMENT_TOKEN_TO_BE_REPLACED

Kaneto Shindô – Bokuto kidan AKA The Strange Story of Oyuki (1992) 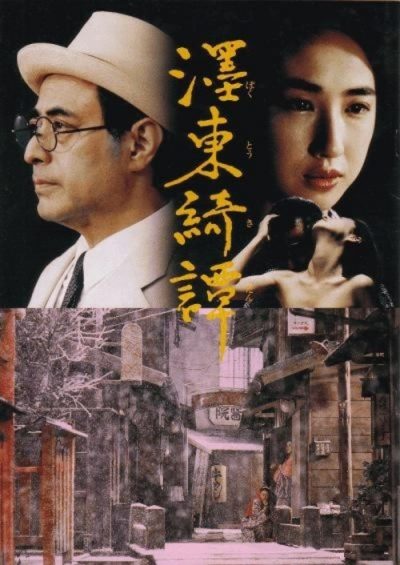 Noted filmmaker Kaneto Shindo directs this erotic drama adapted from the autobiographical book by renowned writer Nagai Kafu. Kafu, a noted rake and whoremonger, became one of Japan’s more celebrated literary figures by documenting fleeting pleasures and subtle human interactions as he frequented Ginza cafes and Yoshiwara brothels. For this film, Shindo captures the essence of Kafu’s work with an episodic structure detailing Kafu’s search for his feminine ideal. One day, Kafu (played by Masahiko Tsugawa), while walking along the rain-slicked streets of Tokyo’s red light district, happens upon Oyuki (Yuki Sumita), a geisha with a heart of gold. Strikingly beautiful, patrons flock to her in the house she shares with her madame (played by film legend Haruko Sugimura). END_OF_DOCUMENT_TOKEN_TO_BE_REPLACED