Plot:
A sixty and something year old captain has been raising for ten years a girl since she was six in his old fishing vessel that is permanently anchored offshore with the intention of marrying her on her seventeenth birthday. He survives bringing fishermen to fish in the vessel and predicting the future using his bow and shooting arrows in a Buddhist painting on the hull of the vessel while the girl moves back and forth in a swing. He also uses the bow and arrows to protect the girl against sexual assault of the fishermen. They live happily until the day that a teenage student comes to the ship and the girl feels attracted for him. When the teenager discovers that the girl was abducted when she was six and does not know the world, he returns to the vessel to bring the girl back to her parents. END_OF_DOCUMENT_TOKEN_TO_BE_REPLACED

Consumed by jealousy, a woman takes an extreme step and undergoes surgery for a new face. Although her lover of 2 years misses her, he falls in love with the new face, not knowing it’s the same woman. END_OF_DOCUMENT_TOKEN_TO_BE_REPLACED

Synopsis:
People from all sorts of backgrounds set sail on a warship. They get drunk on alcohol, drugs and sex. Later, everyone grows tired and falls asleep, then the ship enters an unknown space enveloped in fog. In the morning, the people wake up to find the ship floating in the air. END_OF_DOCUMENT_TOKEN_TO_BE_REPLACED

Korean filmmaker Kim Ki-duk bares his tortured, inebriated soul in “Arirang,” and it’s not a pretty sight. An experience that can be likened only to being stuck next to a drunk in a bar who keeps reminding you he used to be famous, all his friends are bastards and he now understands the meaning of life, pic might have proved therapeutic to make, but it’s a grind to watch, even for fans of the maverick writer-director’s work. Kim’s rep will inevitably ensure further fest bookings for what is essentially one long whine, but theatrical distribution anywhere looks highly unlikely. END_OF_DOCUMENT_TOKEN_TO_BE_REPLACED

Quote:
An artistic, shocking love story that disturbed audiences and confused almost all critics that couldn’t see beyond the disturbing images. A mute girl maintains a fishing resort where people stay in floating mini-houses while fishing, resting and using prostitutes. She services them in any way she can in order to make ends meet but the crude clientele annoy her often, forcing her at times to take revenge. Along comes a brooding, suicidal client with a dark past. Will they connect through their pain or treat each other like animals? Full of beautiful scenery, poetically breathtaking symbolism, animalistic sex and behaviour, and notorious for its faint-inducing scenes involving fish-hooks. END_OF_DOCUMENT_TOKEN_TO_BE_REPLACED 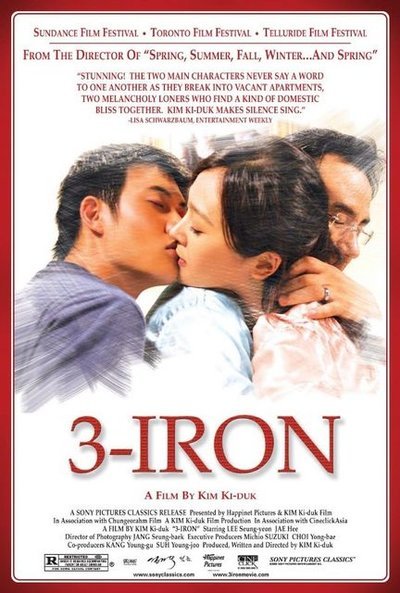 Synopsis
A transient young man breaks into empty homes to partake of the vacationing residents’ lives for a few days. END_OF_DOCUMENT_TOKEN_TO_BE_REPLACED

Quote:
Dream (or Bi-mong, as is the Korean title) is already Ki-duk’s 15th film. It’s also the 15th Ki-duk film I watched so obviously you can consider me a fan. Ki-duk is a director who’s known to stay pretty close to what he does best, so even though the differences between Dream and his earlier films might not seem stellar, they do present a big deviation for Ki-duk standards. Yet in the end, Dream is still 100% Ki-duk and couldn’t have been made by any other. END_OF_DOCUMENT_TOKEN_TO_BE_REPLACED