In the late 1950’s prostitution was banned in Japan and if a woman was found exercising this profession they were sent to a reformatory. This is a story of one of these brave women Kuniko who is released from the reformatory and tries to build a new life. END_OF_DOCUMENT_TOKEN_TO_BE_REPLACED

Kinuyo Tanaka – Ruten no ôhi AKA The Wandering Princess (1960)

Pu Zhe, the younger brother of the Emperor of Manchukuo, Pu Wen, marries Ryuko the daughter of a long-established aristocratic family – all in the interest of the Japanese rulers, which legitimizes the relationship between Japan and its Chinese puppet state. To the surprise of all , a deep love between Pu Zhe and Ryuko develops. It is put to the test when Japan loses the war, Manchukuo is dissolved and the imperial court must flee. The lovers now have to separate: Pu Zhe tries to escape to Japan with his brother, while Ryuko flees with her daughter Eisei over the country. A film on the relationship between Pujie (1907-94), brother of the “last emperor” Puyi and his second wife, Marquise Hiro Saga (1914-87). END_OF_DOCUMENT_TOKEN_TO_BE_REPLACED 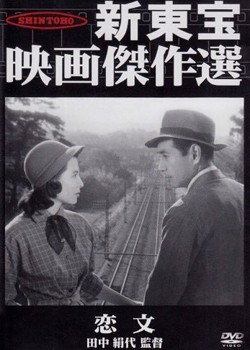 Quote:
This is a rare chance to see a film by Kinuyo Tanaka as director. Tanaka was an actress known through her starring roles in many, many Japanese films in the pre-war and post-war golden ages – films like Mizoguchi’s The Life of Oharu (1952) – through to her tremendous and award winning performance in Kei Kumai’s Sandakan 8 (1974). Although not the first woman to direct a film in Japan Tanaka was able to produce a handful of films in the 50s that are very competently made and much better and more interesting than many in their treatment of women in society. Although it was said that her relationship with Mizoguchi was the reason she was able or allowed to direct it is clear that she had talent that was all her own and that she was able to work with the cream of Japan’s studio talent (the script writer is Keisuke Kinoshita). Koibumi was her first film as director.
END_OF_DOCUMENT_TOKEN_TO_BE_REPLACED