Synopsis:
‘The authorities expect the case of Friedel Walter, alias “Dr. Müller,” to be a straightforward one: he was working as a doctor without proper credentials under a false name. But Mehlin, the man in charge of his case, knows that there is more to the story. When he was injured fleeing from a concentration camp, resistance worker Irene asked her medical student boyfriend Walter to give him medical care…’
– DEFA Film Library END_OF_DOCUMENT_TOKEN_TO_BE_REPLACED 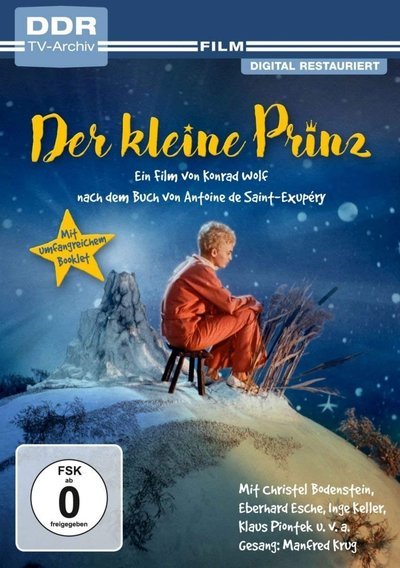 Quote:
Der kleine Prinz (1966/1972) has been even more thoroughly buried by history than the rest of Wolf’s work, or the corpus of DEFA production in general. The reasons for this neglect are multiple on the one hand, the film got caught in the crossfire of the Eleventh Plenum, which took place during the shooting of the film. Although the project had been conceived of as a vehicle for the eventual launch of color TV in the GDR (an undertaking that was repeatedly started and stopped), Heinz Adamock (1921-2010), Intendant of the DFF from 1954 to 1989, sought to get out of his commitment to fund the film, until Albert Wilkening insisted he honor it. END_OF_DOCUMENT_TOKEN_TO_BE_REPLACED

Quote:
A story about the rise of Nazism based on a novel by a German-Jewish author who managed to survive by fleeing to the USA. The movie focuses on working class Berliner Lissy Schroeder who marries clerk Alfred Frohmeyer believing he can provide her with a better life. In 1932, however, his Jewish boss fires him. So Alfred turns to the Nazis, quickly rising in the SA, and acquiring wealth along the way. Lissy, however, discovers there is, as always, a price. The Nazis shoot her brother, a former Communist. And her parents and friends shun her. What is she to do? END_OF_DOCUMENT_TOKEN_TO_BE_REPLACED

While recovering from a mental breakdown, the young Rita Seidel recalls the last two years, in which she fell in love with Manfred, a chemist who is ten years older. As Manfred became disillusioned with his opportunities in East Germany, he moved to the West. Rita followed him there and tried to persuade him to return but soon realized he would never do it. Rita comes to terms with the past and decides to concentrate on her work and the building of a socialist society. Although some of the characters are shown as overzealous in their support of the regime, for obvious reasons the nature of the East German dictatorship is never depicted or discussed. The Stasi, the all-pervasive secret police headed by the director’s brother Markus Wolf, is not mentioned. The film is set in the period immediately before the erection of the Berlin Wall. END_OF_DOCUMENT_TOKEN_TO_BE_REPLACED

Director Konrad Wolf’s gritty and controversial tale follows two young women who go to work at a uranium mine in Wismut, East Germany. With anarchists, former S.S. soldiers, and ex-Russian officers working in close proximity, the mine becomes a microcosm of world politics and social unrest. END_OF_DOCUMENT_TOKEN_TO_BE_REPLACED

Synopsis:
A detachment of Nazi soldiers escorting Greek Jews to the Oswiencim death camp stops at a small Bulgarian town in 1943. Walter, the non-commissioned officer from the Nazi army, a skeptical and disillusioned intellectual, falls most unexpectedly (even for himself) in love with the Jewish girl Rutt. This new feeling gradually makes him stop and reflect on the events taking place around him and comes face to face with the inhuman nature of fascism. He is tortured by anxious thought about the part he is called to play in the eternal struggle between evil and good. Helped by Bulgarian resistance fighters, Walter organizes Rutt’s escape. When the time arrives he realizes that he has been deceived about the exact departure hour of the prisoners.
— Georgi Djulgerov. END_OF_DOCUMENT_TOKEN_TO_BE_REPLACED

Four young Germans in a Soviet POW camp decide to join the Red Army to hasten the end of the war. Their new identities elicit different reactions from Germans and Russians and are difficult to live up to when they are sent behind German lines.
Quote:
A POW camp in the Soviet Union. Four young Germans exchange their uniforms to fight alongside the former enemy for a quicker end to the war. In Soviet uniform they drive with their caregiver on the train to the front. The fellow traveler does not hide long that they are German. It is not easy for them to cope with the new identity. END_OF_DOCUMENT_TOKEN_TO_BE_REPLACED