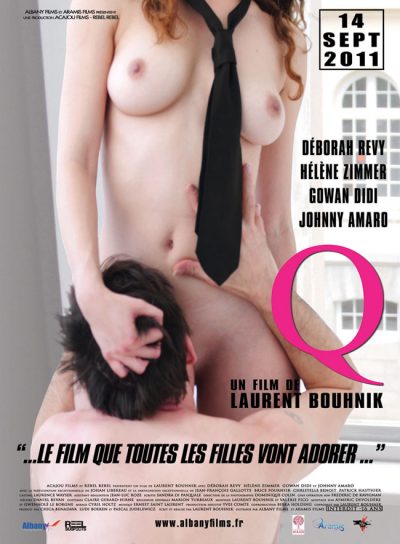 Review from thefilmdb.co.uk
Q’ opens with a heavy dose of nudity – a shower scene shot from the neck down as multiple naked women engage in conversation. We don’t see their faces, just their bodies. Writer/director Laurent Bouhnik holds the shot long enough for the scene to evolve from titilation into something more, establishing leaders and followers of the group.

As the film progresses, more leaders and followers emerge to whom sex is seen as either a weapon/threat or a comfort/shield. Our throughline is a vivacious young, sexually dominant girl (Deborah Revy as Cecile) whose desire upturns the cast of characters.

Q’ uses unsimulated sex scenes to establish these powerful relationships. The images are both tasteful and resonant. The actors come across as brave and natural, but the script doesn’t offer enough solid material to sustain what we are seeing.

This is a curiously drawn and handsomely staged work, miles away from being another sleazy drama, but it’s a victim of its own fragmented narrative. END_OF_DOCUMENT_TOKEN_TO_BE_REPLACED