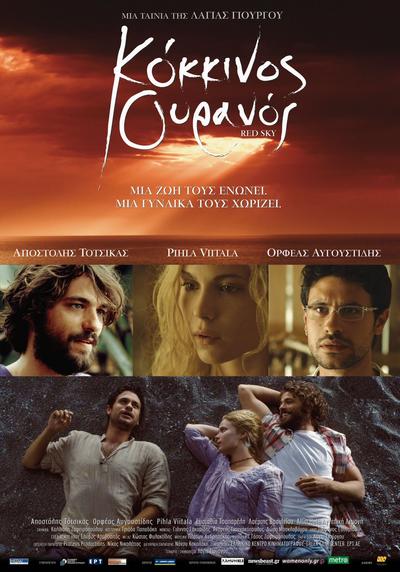 Plot / Synopsis
Two close friends, Aris and Stelios, have their minds on a mutual goal; they “immigrate” to the south of Greece and together they begin a banana greenhouse business in Crete. There they live secluded in a house by the countryside, with a magnificent view of the Libyan Sea having as their sole amusement Angeliki’s nearby tavern. This is a place where mostly foreign tourists arrive; drown like magnets by the magic of the unknown, red African horizon. Determined to keep women out of their lives, they, and mostly Aris, are unfriendly towards the newly arrived Cordoba, a friend of Aris’ sister who lives and works in Germany. Stelios, after going on a casual stroll with her in the island’s market, will end up going to bed with her. In a mood of recklessness that “suits” summer affairs. But this “one night stand” will develop into a relationship and lead to Cordoba moving in the house the two friends share. Feeling antagonistic, mostly towards Stelios, Aris finds himself flirting with Cordoba. In his own way, being quite the opposite of Stelios’s, he fascinates her and finally wins her erotic interest as Cordoba finds in each one of them elements she is looking for in a man’s personality. END_OF_DOCUMENT_TOKEN_TO_BE_REPLACED