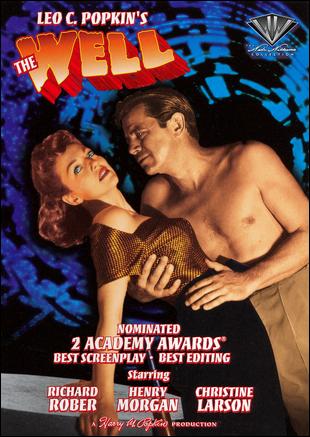 The Well is a modest but generally effective plea for racial tolerance. Based loosely on a real incident, the film tells of the disappearance of a little African-American girl in a small, segregated community. Caucasian Claude Packard (Harry Morgan, the nephew of the town’s richest man (Barry Kelley), is the last person seen with the little girl. Sensing a coverup when Morgan is not immediately charged, the black community is on the verge of a riot. But when it’s discovered that the little girl has fallen down a well, all racial differences are forgotten as black and white neighbors work shoulder to shoulder to rescue the child. The Well tries very hard to be equitable by 1951 standards, and is heartfelt enough to overcome its occasional lapses into stereotype and condescension. ~ Hal Erickson, Rovi END_OF_DOCUMENT_TOKEN_TO_BE_REPLACED