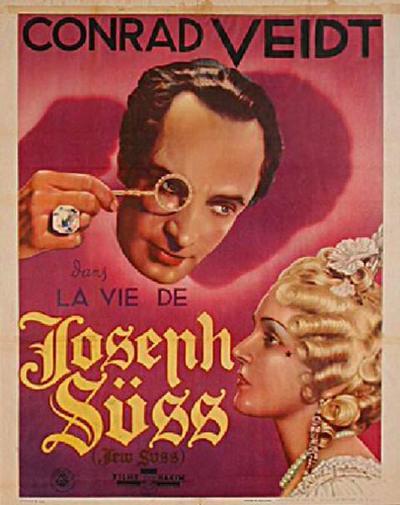 Quote:
Unlike the horrifically antisemitic 1940 Nazi propaganda film, Lothar Mendes’ adaptation of Lion Feuchtwanger’s book offers a fairly sympathetic depiction of a Jew (Conrad Veidt) who seeks political power in order to improve the plight of Germany’s Jewry. Despite some unpleasant stereotypes – Suss is scheming and ruthless – the film is ultimately on his side, and the ending is deeply moving.

While films about the rise of fascism in Europe were hindered by censorship, producer Michael Balcon hoped that the scenes of racism would draw attention to the Nazi persecution of Jews, despite the 18th century setting. The scene in which a Jew is falsely accused of killing a Christian woman, to use her blood for Passover rituals (the notorious ‘blood libel’), is particularly disturbing. The film was a box-office success, although Observer critic CA Lejeune suggested that the money should have been spent on a feature about British industry rather than “a film about a little German municipality of 200 years ago”. END_OF_DOCUMENT_TOKEN_TO_BE_REPLACED