Jewel thief Rochard is savagely murdered while traveling across country on a train, but his murderer fails to find the diamonds Rochard has stolen. Cut to Paris, where Rochard’s daughter, Nicole, is being interrogated by the police. She insists she knows nothing about her father’s nocturnal affairs, but that doesn’t stop the killer, who believes she knows where the diamonds are, from leaving her threatening phone messages or breaking into her apartment to terrorize her. The killer sports bright blue eyes and a voice altered by an electrolarynx (a device used to help throat-cancer patients speak again). END_OF_DOCUMENT_TOKEN_TO_BE_REPLACED

After indulging in hallucinogenic drugs as part of an experiment at the behest of her boyfriend, Valentina imagines a terrifying murder committed with a spiked metal glove. Soon the incident becomes the basis of a news story, and it’s discovered that, a few months earlier, a woman really had been viciously murdered in the same apartment and her murderer never caught. Before long, Valentina comes to believe that she, too, is being stalked by the killer, but no one will believe her, including her traitorous boyfriend. END_OF_DOCUMENT_TOKEN_TO_BE_REPLACED 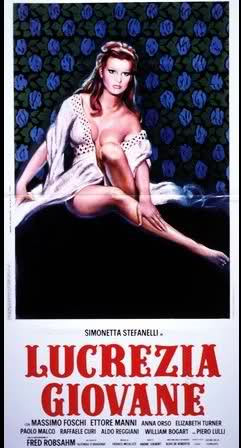 Historical drama around the sexual exploits of the young Lucrezia Borgia, daughter of Alexander Borgia and sister of the infamous Cesare Borgia.
Simonetta Stefanelli stars as the ruthless Lucrezia Borgia in Luciano Ercoli’s take on the Borgia family. In the early 16th century, Italy is ruled by the powerful Borgia family, led by Cesar Borgia and his sister Lucrezia (Martine Carol). In a ruthless power play, Cesare plots to have his sister’s husband murdered.

But without her brother’s knowledge, Lucretia has taken a strong lover who will challenge the Borgias, but Cesar’s love for his sister will once again lead to the demise of Lucrezia’s lover and unite the 2 siblings in an incestuous relationship. END_OF_DOCUMENT_TOKEN_TO_BE_REPLACED