IMDB PLOT
Turn-of-the-century Naples. Salvatore Ruotolo and his wife are murdered and their bodies are found in different locations. Since the evidence points to a crime by the Neapolitan crime organization, the Camorra, fear and corruption cause serious hindrances to the investigation by police authorities. In charge is a young and courageous judge who, using evidence discovered by chance, tries to reconstruct the story of the double murder. The plot that the judge must unravel is very complicated. Many people are questioned, even those apparently above suspicion. Deciding to get to the bottom of the matter, the judge keeps all the suspects under arrest, causing a backlash of public opinion. END_OF_DOCUMENT_TOKEN_TO_BE_REPLACED

A female school teacher is implicated in a murder in a Sicilian town only hours after her arrival. The dead man insulted her on the bus on the way into town. As the mystery unfolds, it becomes clear that the town is hiding some very sinister secrets. END_OF_DOCUMENT_TOKEN_TO_BE_REPLACED

Synopsis:
In the thirties, during the Fascist Dictatorship, an insurance broker, Omero Battifiori, reaches a small country town from Rome seeking for new customers. The main authorities, expecting an incognito inspection from the Fascist Party of the capital, suspect him to be the inspector and a very important member of the Party. The misunderstanding leads to a number of equivocals until Omero reveals his identity. END_OF_DOCUMENT_TOKEN_TO_BE_REPLACED

Agostina is a maid turned prostitute during World War II. She sends all the money she makes to the local priest in her home village for safekeeping. After the war is over, Agostina and her friend plan to open a clothing store so they return to her home island to collect the money from the priest. But after arriving there, Agostina learns in shock that the priest has been dead for more than a year and that his eccentric successor mistook the received money for donations and spent all of it on building a new orphanage for war orphans. To make matters worse, other islanders think that Agostina is now a millionaire and beg her to help them financially. END_OF_DOCUMENT_TOKEN_TO_BE_REPLACED Early 1970s. Amedeo is a poor Italian immigrant living in Australia for twenty years. Seeking to marry an Italian wife, he corresponds with Carmela, a pretty girl from Rome. They do not reveal their true identities and do not mention their hardships in their letters. Carmela is actually a prostitute seeking an opportunity to change her life style. Amedeo, embarrassed about his looks, sends a photograph to Carmela of his handsome friend Giuseppe. Finally, Carmela lands in Melbourne. Amedeo meets Carmela at the airport and he is struck by her beauty. Thinking he will be rejected because of his looks, he decides to tell Carmela that he is Giuseppe, and he reserves to tell her the truth at a later moment. This starts a three day eventful journey across Eastern Australia. Carmela will soon become better acquainted with Amedeo and she learns of his hardships as an immigrant. She eventually meets the real Giuseppe, however, she believes that he is her betrothed groom, Amedeo. She quickly learns Giuseppe’s true shady intentions. In fact, she finds herself living in a red light district and then escapes. Amedeo and Carmela finally find true happiness together. END_OF_DOCUMENT_TOKEN_TO_BE_REPLACED 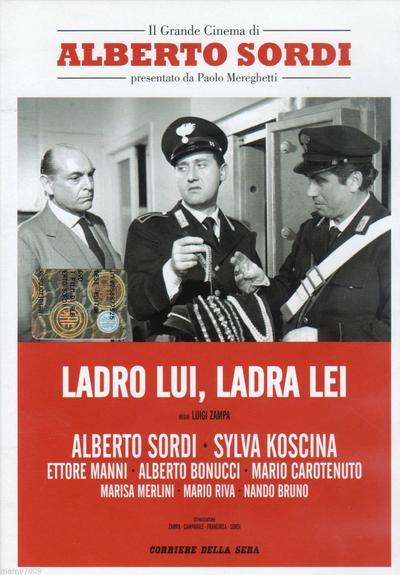 Plot synopsis:
Cencio, a Roman pilferer, is periodically in prison. He’s a genius at scams. He loves his childhood sweetheart Cesira, who, in order to get herself out of the slum’s life, soon becomes his partner in crime. With Cesira’s help, Cencio is successful in several swindles. In the meantime, Cesira finds her true love. Cencio then tries the big hit in a jewelery. But his lucky break is over… END_OF_DOCUMENT_TOKEN_TO_BE_REPLACED 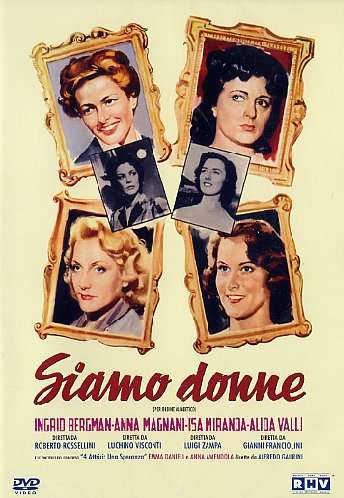 Detailed plot summary of the five episodes
“Concorso 4 Attrici 1 Speranza” (“Four stars and a starlette”)
Anna Amendola decides to leave her home to become an actress, even though her mother says that she can not come back if she does. She goes to Cinecittà, where a casting is taking place to find a girl to be included in a segment of Siamo donne. The contest begins with the girls walking through a line, where they are checked for certain requirements, especially age. The ones who pass this stage are given a meal by the studio, while a spotlight scans through the tables, finding girls for the screen test stage. Amendola passes through these stages. Then, there are a series of screen tests, where several girls are asked questions about their dreams and ambitions. The results of the screen tests are not decided until the next day; therefore, Amendola sleeps at a neighbor’s house, since she does not want to go home and forfeit her chances of winning the contest. The next day, she is called up as a finalist, along with Emma Danieli. The story ends with the two finalists about to give interviews. END_OF_DOCUMENT_TOKEN_TO_BE_REPLACED