Francisco is rich, strict on principles, and still a bachelor. He meets Gloria by accident, and is intent on marrying her and courts her until she agrees. Now he is a dedicated husband, but his passion starts to exhibit disturbing traits. END_OF_DOCUMENT_TOKEN_TO_BE_REPLACED

Quote:
The delirious journey of a mental disordered man, who is obsessed in making the perfect crime. END_OF_DOCUMENT_TOKEN_TO_BE_REPLACED

Luis Buñuel – Los Olvidados AKA The Young and the Damned (1950)

A group of juvenile delinquents live a violent and crime-filled life in the festering slums of Mexico City, and the morals of young Pedro are gradually corrupted and destroyed by the others. END_OF_DOCUMENT_TOKEN_TO_BE_REPLACED

Quote:
Although it is often described as a documentary, Land Without Bread is actually an early parody — some would say a Surrealist parody — of documentary filmmaking. The film focuses on the Las Hurdes region of Spain, the mountainous area around the town La Alberca, and the intense poverty of its occupants. Buñuel, who made the film after reading an ethnographic study (Las Jurdes: étude de géographie humaine (1927)) by Maurice Legendre, took a Surrealist approach to the notion of the anthropological expedition. The result was a travelogue in which a disinterested narrator provides unverifiable, gratuitous, and wildly exaggerated descriptions of the human misery of Las Hurdes. END_OF_DOCUMENT_TOKEN_TO_BE_REPLACED 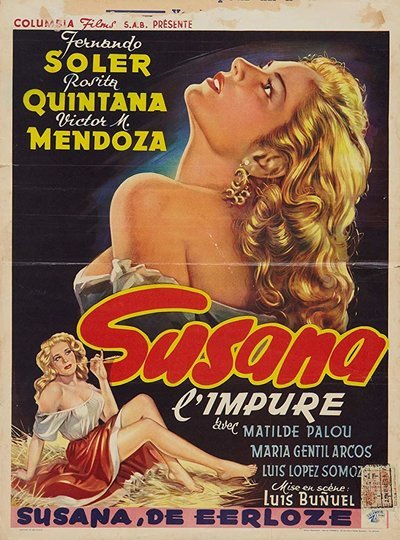 Susana (Susana, demonio y carne or The Devil and the Flesh) is a 1951 film directed by Luis Buñuel. It is the story of a girl of questionable mental stability who escapes from incarceration and ends up at a plantation where she disrupts a working family’s daily routines and chemistry. END_OF_DOCUMENT_TOKEN_TO_BE_REPLACED

Synopsis:
After years in Mexican exile, Buñuel returned to his native Spain to make this dark account of corruption, which was immediately banned. A young nun, full of charity, kindness, and idealistic illusions about humanity, visits her uncle and tries to help some local peasants and beggars. But her altruism is greeted with ridicule and cruelty. Pinal gives a superb performance in the title role, and Buñuel’s clear-eyed wit is relentless in its depiction of human selfishness, ingratitude, and cynicism. The final beggars’ orgy – a black parody of the Last Supper, performed to the ethereal strains of Handel’s Messiah – is one of the director’s most memorably disturbing, funny, and brutal scenes. A masterpiece.
— Timeout. END_OF_DOCUMENT_TOKEN_TO_BE_REPLACED

Quote:
This wicked adaptation of the Octave Mirbeau novel is classic Luis Buñuel. Jeanne Moreau is Celestine, a beautiful Parisian domestic who, upon arrival at her new job at an estate in provincial 1930s France, entrenches herself in sexual hypocrisy and scandal with her philandering employer (Buñuel regular Michel Piccoli). Filmed in luxurious black-and-white Franscope, Diary of a Chambermaid is a raw-edged tangle of fetishism and murder—and a scathing look at the burgeoning French fascism of the era. END_OF_DOCUMENT_TOKEN_TO_BE_REPLACED