A young woman works as a prison guard in a hopelessly overcrowded jail in central Madagascar. She passes the time daydreaming about her father, a murderer, who abandoned her as a child after killing his own brother. In her imagination, her father becomes a mythical killer, wandering the countryside and rolling enchanted dice to decide the fate of his victims. Secretly, she yearns for the day her father will turn up amongst the prisoners. When a new inmate arrives claiming to know her father, her fantasies begin to turn to nightmares. END_OF_DOCUMENT_TOKEN_TO_BE_REPLACED

In Toamasina, on the east coast of Madagascar, Saholy runs a small business of pedicabs. She takes care of her drivers as if they were her sons and lets them find with her a home where they get mothered. Tormented with a difficult past, Njaka is looking for his place in the bosom of this big family. At seventeen he knows he must decide his future but lets himself still easily be tempted by girls and smoking joints. END_OF_DOCUMENT_TOKEN_TO_BE_REPLACED

For Malagasy people who honor their ancestors, when the deceased are in the grave, their spirits are always alive and present, they maintain their individualities and their kinship connections. At Alasora, in the Central Highlands of Madagascar, Marie takes care of a royal tomb that was entrusted to her and welcomes visitors who have come to ask a favor from the ancestors. END_OF_DOCUMENT_TOKEN_TO_BE_REPLACED 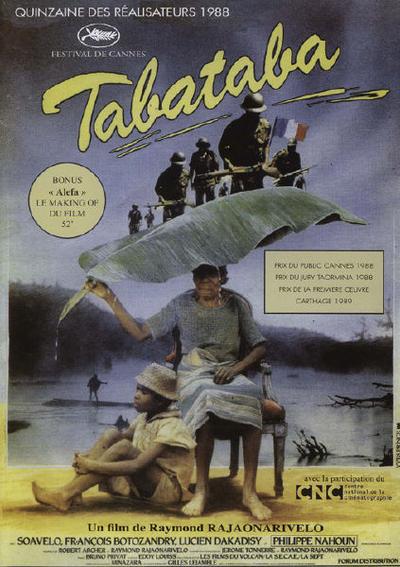 Quote:
Tabataba tells the story of a small Malagasy village during the independence uprising which took place in 1947 in the south of the country. For several months, part of the Malagasy population revolted against the French colonial army in a bloody struggle. The repression in villages that followed was terrible, leading to fires, arrests and torture. Women, children and the elderly were the indirect victims of the conflict and suffered particularly from famine and illness. One leader of the MDRM Malagasy Party, which campaigns for the independence of the country, arrives in a village. Solo (François Botozandry), the main character, is still too young to fight but he sees his brother and most of the men in his clan join up. His grandmother, Bakanga (Soavelo), knows what will happen, but Solo still hopes his elder brother will return a hero. After months of rumours, he sees instead the French army arrive to crush the rebellion. END_OF_DOCUMENT_TOKEN_TO_BE_REPLACED