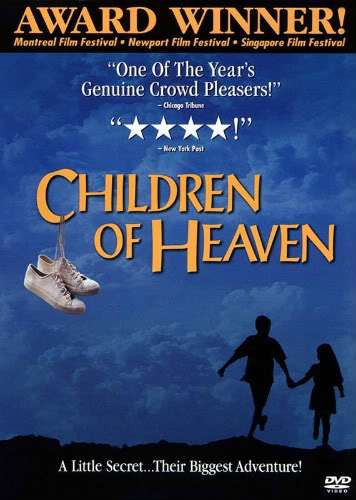 Movie Review
The Children of Heaven (1997)
FILM REVIEW; For a Pair of Sneakers, Longing, Lies and a Plan
By JANET MASLIN

The young hero of Majid Majidi’s ”Children of Heaven” is played by Mir Farrokh Hashemian, a desolate-looking boy with huge brown eyes and a way of sending tears suddenly rolling down his cheeks. Those tears well up with some regularity during this film about 9-year-old Ali, his younger sister Zahra (Bahareh Seddiqui) and their scheme for sharing a pair of his tattered sneakers. The children want to hide the fact that Zahra’s shoes have been lost because this will be a hardship for their parents. The family’s carefully detailed poverty, which reflects the filmmaker’s own childhood experience, colors everything that happens in this story.

Events in the film are seen through the children’s ingenuous eyes, as is so often and artfully the case in Iranian films. (A child’s-eye view is, among other things, helpful in circumventing Government censors.) But in the more honest, less manipulative films that this one resembles — especially the graceful work of Jafar Panahi (”The White Balloon,” ”The Mirror”) — what the young characters observe is liable to be more surprising than it is here. In ”Children of Heaven,” life is sweet despite countless hardships, and no reality beyond the economic intrudes upon a fairy tale atmosphere. Only through heavy-handed emphasis does the quest for new sneakers take on any greater meaning. END_OF_DOCUMENT_TOKEN_TO_BE_REPLACED