Quote:
“One day I am going to pull the anchor that keeps my ship away from the seas”, is one of the most famous phrases of the Belgian poet Henri Michaux, to whom the film director Mariano Llinás decided to pay tribute with his new work in a pandemic. END_OF_DOCUMENT_TOKEN_TO_BE_REPLACED

Quote:
“Lifeguards, luxury hotels from early XXth Century, mermaids, sea animals and sand castles gather in this labyrinthine essay. A “documentary” about balnearios, Argentine bath resorts and the idea of cities dedicated exclusively to idleness, empty along the winter months and crowded in the summer.” END_OF_DOCUMENT_TOKEN_TO_BE_REPLACED

Quote:
First part of the three that make up “La flor”. It consists of a prologue (the presentation of the film by the director) and two episodes. In the first, a mummy releases a curse in an excavation in a province in the interior of Argentina. In the second, a couple of pop singers meet to play after many years, while a woman injects scorpion venom for mysterious purposes. END_OF_DOCUMENT_TOKEN_TO_BE_REPLACED 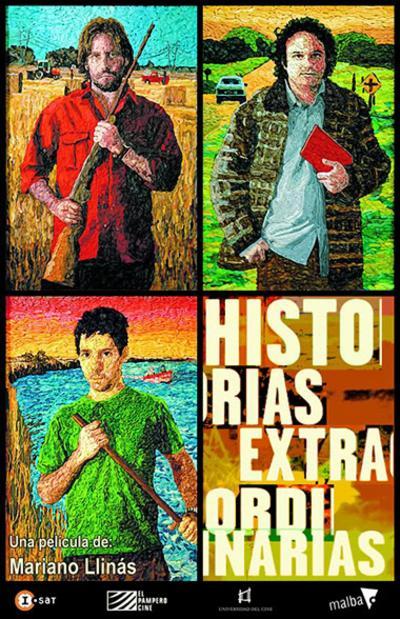 Quote:
Historias extraordinarias tells the adventures of three men known only as H (Agustin Mendilaharzu, doubling as cinematographer), X (director Mariano Llinás) and Z (Walter Jakob). These adventures come across as self-conscious constructions and journeys happening in the here and now. But though the strongest literary influences on Llinás’ fascinating screenplay are fiction writer Jorge Luis Borges and disciple Adolfo Bioy-Casares, it would be wrong to label Historias extraordinarias as literary per se: Instead, a viewer would have to stretch back to the grand serial silents of Louis Feuillade for something as ambitious as Llinás’ detailed telling of the three separate, intertwined tales, all involving men on quests in situations that force them to question who they really are. Llinás jumps between the storylines over 18 episodes, usually devoting no more than about 15 minutes at a time to any single one. The governing concept uniting the tales is how each man begins with a specific task, and then veers away from the straight-and-narrow, bringing the job’s purpose into question. END_OF_DOCUMENT_TOKEN_TO_BE_REPLACED