The movie seethes with conflict and bad blood – often unspoken. The conflicts arise over deeply felt divisions in social class, in gender and in generation, and result in unspoken accusations of callousness and cowardice, vanity and selfishness.

In many respects this is a movie of another time – these days, unless a family has a strong military tradition, I can imagine few families now enraged by a son’s expressed wish that a war could be won without his involvement, few families in which an employer would not draft a letter for his decades-long employee’s only child to keep him out of war – and even refuse to write a letter (for which his mother pleads) for his own beloved brother’s draft deferment. END_OF_DOCUMENT_TOKEN_TO_BE_REPLACED

Quote:
Cutthroat careerism, wild sex, and fierce female protagonists are all on offer in this adaptation of Jacqueline Susann’s sensational and wildly popular novel. Patty Duke, Barbara Parkins, and Sharon Tate star as three friends attempting to navigate the glamorous, pressurized world of big-time show business—the “valley” is not a place but a narcotized state of mind, and the “dolls” are the pills that rouse them in the morning and knock them out at night. Blending old-fashioned gloss with Madison Avenue grooviness, director Mark Robson’s slick look at the early days of sexual liberation and an entertainment industry coming apart was a giant box-office hit, and has become an unforgettably campy time capsule of the 1960s. END_OF_DOCUMENT_TOKEN_TO_BE_REPLACED 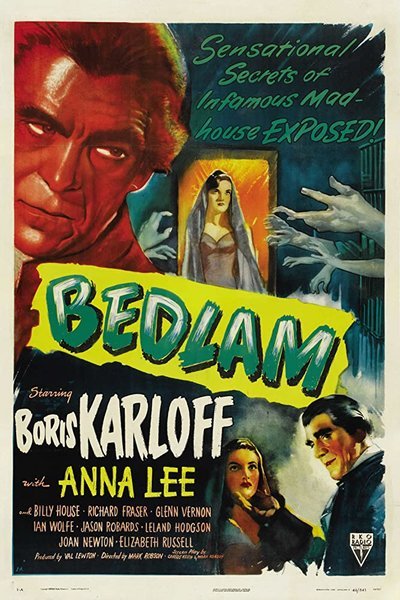 Nell Bowen, the spirited protege of rich Lord Mortimer, becomes interested in the conditions of notorious St. Mary’s of Bethlehem Asylum (Bedlam). Encouraged by the Quaker Hannay, she tries to bring support to reforming Bedlam, but the cruel Master Sims who runs it has her committed there. The inmates, however, have the last say. END_OF_DOCUMENT_TOKEN_TO_BE_REPLACED

Synopsis:
It’s the pre-WWII era. Peyton Place is a small town in New England, whose leading adult citizens rule the town with their high moral standards, which they try to pass on to their offspring. The adults, especially those that wield power largely through their positions and/or through their wealth, will not tolerate anything they believe morally improper, even if there is a hint of impropriety without comprehensive evidence to back up the hints. As their offspring grow from teenagers to adults, the offspring learn that there is much hypocrisy by the adults lying underneath that façade of proper Christian morals. The offspring begin to rebel in different ways, which is brought to public scrutiny with the arrival into town of an “outsider”, the new young high school principal Michael Rossi, and through a murder trial. END_OF_DOCUMENT_TOKEN_TO_BE_REPLACED

Chicago Film Society writes:
Tasked with heading up RKO’s horror unit from 1942 to 1946, producer and screenwriter Val Lewton was responsible for one of the most extraordinary runs of films to ever come out of classic Hollywood. Given modest budgets, lurid titles, and a running-time cap of 75 minutes by his superiors, Lewton, along with up-and-coming directors Mark Robson, Jacques Tourneur, and Robert Wise, produced a string of bewitching, ethereal masterpieces and developed a house style defined by expressive shadows, pervasive melancholy, somnambulism, and ambient dread. One of Lewton’s crowning achievements, The Seventh Victim broke from horror conventions of its time and found darkness lurking not in the vampires and monsters of the old world but in good ol’ American sham psychoanalytics and success-centered occultism. END_OF_DOCUMENT_TOKEN_TO_BE_REPLACED 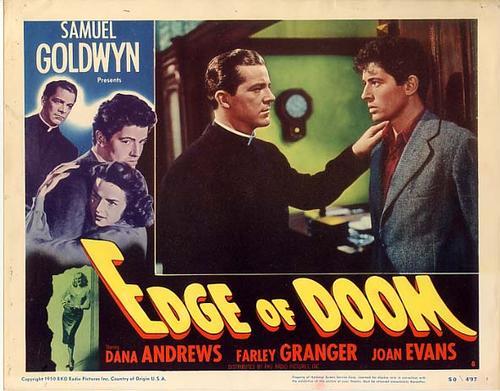 Martin Lynn (Farley Granger) has crossed his breaking point. Poor, stuck in a menial job and mourning his recently deceased, devoutly Catholic mother, the mentally fraying youth visits his local pastor to arrange a decent funeral for her and, in a frustrated rage, kills the cleric with a crucifix. On the run in a clouded haze, Martin slips into the night and anxiously watches as circumstances result in someone else being arrested for the crime. But the empathetic Father Roth (Dana Andrews), inquiring into the incident, sees something suspect in Martin – as well as a soul worth saving. The only crime drama produced by Samuel Goldwyn, this under-recognized film-noir thriller with a unique religious twist is powered by a searingly intense performance by Granger as a man undone by unforgiving forces closing in on him. Directed with clockwork urgency by Mark Robson, shot in shimmering black-and-white by Harry Stradling and named one of 1950’s 10-best films by the National Board of Review, Edge of Doom is a haunting vision of darkness not easily shaken. END_OF_DOCUMENT_TOKEN_TO_BE_REPLACED