Quote:
A horrifying series of murders, committed by a teenaged killer in 1968, prompted a group of filmmakers to chart his path, capturing the things he might have seen before committing his crimes. Their result is this provocative, rarely-screened meditation on geography and society. END_OF_DOCUMENT_TOKEN_TO_BE_REPLACED

Quote:
Three high school girls about to take their final exam, secretly plan to ruin the diploma ceremony in order to avenge themselves of that school which treated them as delinquents. Two classmates who discovered their plan decide to join the rebellion. They steal all the graduation certificates, use their charms to get weapons from Jieitai soldiers and establish their base in the mountain. END_OF_DOCUMENT_TOKEN_TO_BE_REPLACED 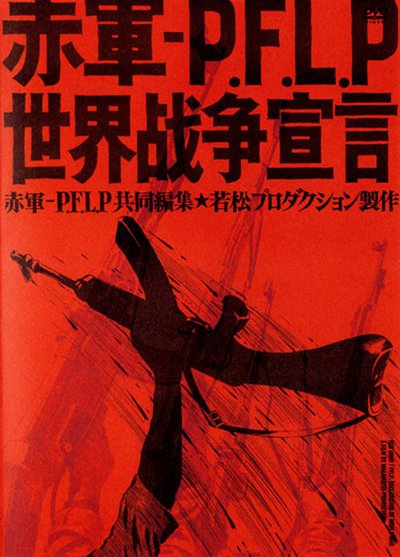 Quote:
It was a milestone of film as activism, cinema as movement in Japan’s context. Adachi and Wakamatsu went to Beirut on the way back from the Cannes Film Festival. There, in collaboration with the Red Army members and PFLP, they produced this newsreel film depicting the everyday activities of Arab guerrillas as a cinematic narrative on the world revolution. Being a fusion of intense agitation and the ‘landscape theory’ approach inherited from “Aka. Serial Killer,” the film was conceived as a new form of news report, and was discussed in synchronicity with J-L Godard’s Dziga Vertov Group and the revolutionary films of Latin America, transcending geographical distances. END_OF_DOCUMENT_TOKEN_TO_BE_REPLACED

Synopsis:
A young prostitute tries to understand why she suffers from melancholy and benumbed feelings. Against a background of sexual liberation and political subversion, this latest libertine work by radical film director M. Adachi is one of the very few existing feminist erotic films. Masao Adachi’s personality and films deserve careful consideration. Relatively unknown as yet to Western audiences, he happens to be one of the most radical film-makers around in recent years. Gushing Prayer, shows the influence of Koji Wakamatsu, another enfant terrible of Japanese cinema whom Adachi assisted on many films. Gushing Prayer does not hesitate to show the resentments and dissatisfactions of someone who ought to be nothing more than an object of fantasies. Highly pertinent, with a bold avant-garde style, he sets the record straight as far as the sexual desires of supposedly liberated Japanese women are concerned. One of the rare feminist films of the 70’s, it audaciously evokes sexual liberation and political subversion. END_OF_DOCUMENT_TOKEN_TO_BE_REPLACED

Politically-motivated Japanese filmmaker Masao Adachi’s first feature in over three decades tells the tale of an imprisoned terrorist who is forced to confront his ideological convictions head-on after failing in his mission and being subjected to gross treatment while held as a detainee. “M” was one of three terrorists involved in a suicide attack on a high-profile airport. Unfortunately for “M,” his grenade failed to detonate. Immediately captured and thrown in prison, “M” gradually loses his grip on reality as a result of his maltreatment, and begins to question the ideas that drove him to attempt the ultimate sacrifice. END_OF_DOCUMENT_TOKEN_TO_BE_REPLACED

IMDB says:
A gynecologist attempts to rid the world of sexual problems by separating sex on the one hand and reproduction, which he feels should be left to artificial wombs. END_OF_DOCUMENT_TOKEN_TO_BE_REPLACED

Quote:
Adachi Masao’s long-awaited return from hiatus is an absurdist comedy with political bite. The multilayered hypocrisies of contemporary Japan are slowly unveiled when a wordless man stages an unexplained hunger strike and the people who surround him exploit his silence to further their own cause. END_OF_DOCUMENT_TOKEN_TO_BE_REPLACED