Quote:
Colin has a very pleasant life: he is rich, he loves the food his cook makes (Nicolas), he loves his pianocktail (contraction of piano and cocktail, a word invented by Vian) and his friend Chick. One day while having lunch with Chick, Chick tells him that he met a girl named Alise with whom he has a common passion: the writer Jean-Sol Partre (an spoonerism of Jean-Paul Sartre who was Boris Vian´s friend). Colin meets Chloe at a party Chick invited him to. They fall in love, marry, but Chloe becomes ill during their honeymoon. As time passes, Chloe’s condition deteriorates while the relationship between Chick and Alise turns sour … END_OF_DOCUMENT_TOKEN_TO_BE_REPLACED Quote:
A man entranced by his dreams and imagination is love-struck with a French woman and feels he can show her his world.

Quote:
Michel Gondry assembles alternate version of his The Science of Sleep
from cut scenes and B-roll footage. END_OF_DOCUMENT_TOKEN_TO_BE_REPLACED 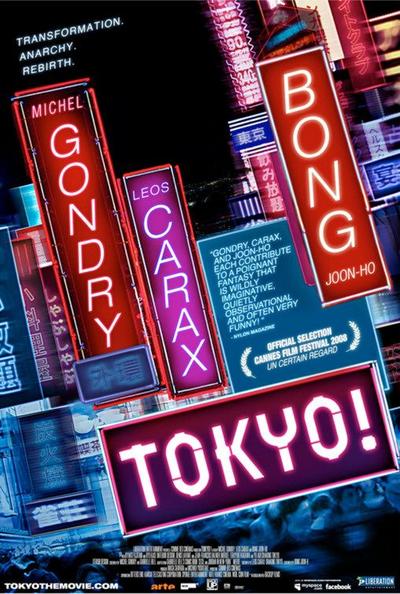 This triptych of tales set in the titular city of Tokyo suggests an Eastern version of NEW YORK STORIES, but there is a significant difference: in this case, none of the three writer-directors (two French and one Korean) are natives; consequently, their short films emerge less as love letters to the city than as skewed points of view from outsiders looking in on what what they consider to be a strange, exotic land, bordering on a freak show. With their surreal touches, fanciful symbolism, and at least one outright refernce to Japanese kaiju cinema, TOKYO! emerges as a boderline genre effort – not quite a fantasy film but definitely a curious piece of cinefantatique. Unfortunately, the weirdness is not always entertaining – in some cases it is merely boring – but there is enough going on to make this interesting for fans of art house cinema. END_OF_DOCUMENT_TOKEN_TO_BE_REPLACED