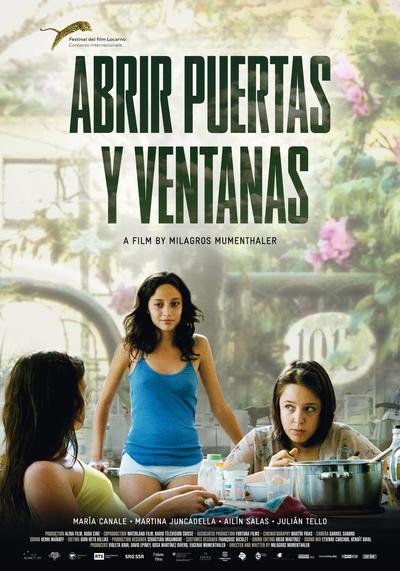 From Argentina, this film is called Abrir puertas y ventanas in Spanish, “To Open Doors and Windows.” And indeed the first time director, Milagros Mumenthaler, has a fixation on these two apertures: the camera is always catching a window or a door being gone through, opened, slammed. As has been remarked by others, it is the visuals that appeal in this slow-moving, delicate film. Less appealing and not deeply explored are the protagonists — three sisters, though they don’t resemble each other. Marina (Maria Canale), a college student and the most responsible one of the three, doesn’t want anything to change. The irritable and uncooperative Sofia (Martina Juncadella) is an obvious contrast, constantly changing outfits and rearranging or disposing of the decor. The listless Violeta (Ailin Salas) lies about scantily clad, most of the time too lazy even to get fully dressed. Something is off, but it takes a while to find out what — their grandmother and guardian, a university professor, has recently died of a heart attack. Hanging around in their comfortable house and troubled by family secrets, the sisters appear to have few friends and no other family. Though Maria occasionally goes off to school, they all seem largely immobilized, it would seem as much by laziness, the heat, and boredom as by grief; or they may need to express grief and lack the energy to do so. They can’t be bothered to go to a video shop and merely telephone to order a movie to be delivered — “A comedy,” “Something that’s not Argentinean.” END_OF_DOCUMENT_TOKEN_TO_BE_REPLACED