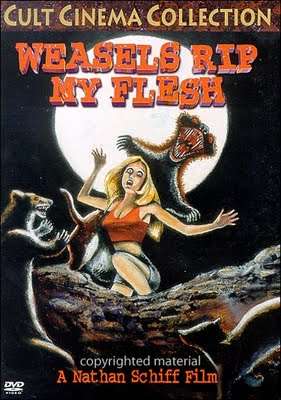 An IMDB hater wrote:
This movie is a total piece of junk. It was shot on what looks like 8 millimeter film(not sure though). It looks like it was somebody’s student film. I think that this is the worst movie I’ve ever seen, and I’ve seen some pretty bad movies. I can’t believe that this movie is out on DVD, it’s so bad. The plot has something to do with a giant rabbit or something, I don’t know. I pretty much fast forwarded through the movie because it was so unbelievably bad. This movie has to be one of the worst ever made. I believe that the sound quality is bad and messed up too. The movie also had bad edits, I believe and poor special effects. I guess that the movie would be decent for a student film. They say that Ed Wood’s movies are bad. This movie makes Wood’s movies look like “Casablanca”. It’s a no-budget movie. I would recommend this movie to people only for them to see the world’s worst film. It should have remained buried. Take care. END_OF_DOCUMENT_TOKEN_TO_BE_REPLACED

“PAndroid” wrote:
I originally just got this film for it’s rarity as an online friend of mine managed to acquire a copy through a trade. When I put the VHS into the player I was presented with challenging slice of art-house genius that greatly exceeded my pretty much non existent expectations. Like the great works of lynch and jodorowsky it is a completely unstreamed celluloid capture of an artists consciousness,abandoning logic to assault the viewers senses with the directors own unique vision. This isn’t like any of other schiffs other films, which whilst highly enjoyable are ultimately extremely tacky gorefests. This is a stunning observation of a lonely mans descent into being unable to decipher relaity and fantasy. Words cannot do it justice in the slightest. It one of the most different and personal films I have ever seen, layered in gruesome yet poetic psychosexual imagery to portray the main characters(who remains nameless throughout the film)ever slipping mask of sanity. Whilst very open ended I partially see the film as a commentary on perception and how we see things. It simply defies genres and conventions, this is true art film-making. Made from real raw emotion and a daring mind it is perhaps unsurprising it has not seen an official release ever. But for anyone who likes bold underground cinema this is an absolute must see, and possibly the most underrated film of all time. A sublime,macabre masterwork of dream logic cinema. END_OF_DOCUMENT_TOKEN_TO_BE_REPLACED