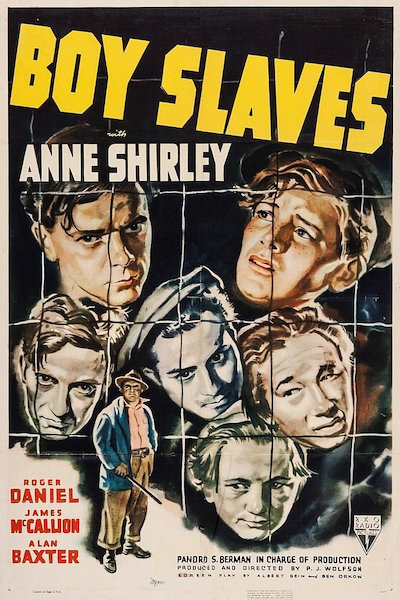 The lurid title is tabloid drama but the film is a surprisingly effective drama of teen hobos rounded up and shunted into working like prisoners on a rural turpentine farm by unscrupulous racketeers. Probably made as RKOs answer to The East Side Kids or The Little Tough Guys or (pre) Bowery Boys, this even has lookalikes to Huntz hall and Frankie Darro. The lead juvenile Roger Daniel is excellent and research reveals he almost immediately went straight into obscurity (maybe the War intervened as he was 15 in 1940) and only turned up in several Monogram teen/rural pix and later their JOE PALOOKA films of the mid 40s in a bit part. Pity, as he is a good young actor. The older teen Tim played by James Mc Callion is exactly like Frankie Darro but plays his part a lot like a young Cagney. Far more successful as an actor and can be seen briefly in NORTH BY NORTHWEST. He had a long film and TV career right up until 1990. One of the kids, Walter Tetley ended up being the voice of Sherman in the Rocky and Bullwinkle cartoons in the 60s. BOY SLAVES is a good small RKO drama worth catching. There is a very clever scene early in the film by a swamp with interesting model work using a model of a freight train ‘in the distance’.
(from IMDB) END_OF_DOCUMENT_TOKEN_TO_BE_REPLACED