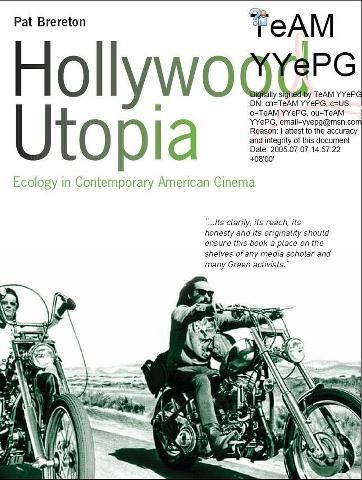 The fruit of years of painstaking study, Pat Brereton’s Hollywood Utopia is a landmark in the emerging field of ecological media criticism. The more urban human societies become, the more our media reflect upon the landscapes, the animals and the fragile unities of our planet. Of no media formation is this more true than of Hollywood, as Brereton argues in this meticulously researched and carefully organised work. Far from trashing the planet, Hollywood films have, Brereton claims, a tradition stretching back to the 1950s of care and concern for humanity estranged from its roots, and a world at risk of destruction. Through innovative analyses of Jurassic Park, Easy Rider, Thelma and Louise, Star Trek, Terminator 2 and Blade Runner among countless older and newer films, Brereton traces a utopianism often overlooked in traditional film criticism. Not only films with explicitly Green agendas like Emerald Forest and Medicine Man, but in films noted for far different qualities exhibit the saving grace of nature. END_OF_DOCUMENT_TOKEN_TO_BE_REPLACED