Synopsis:
The story of a struggling playwright in 1850s Paris who is inspired by a consumptive young woman he falls in love with. Based on Henri Murger’s novel `La Vie de Boheme’. END_OF_DOCUMENT_TOKEN_TO_BE_REPLACED 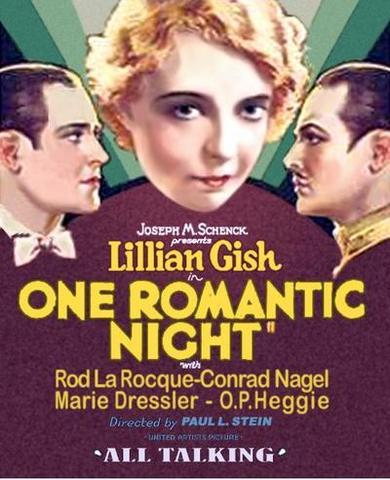 Plot: A fairy-tale ball, first kisses, broken hearts, and a beautiful princess wooed by a handsome prince. So much can happen during One Romantic Night! Two great ladies of the screen who could scarcely be more dissimilar – waiflike, vulnerable Lillian Gish (in her Talkie debut), who excelled at heart-wrenching melodrama, and barrel-figured, bulldog-faced Marie Dressler, who excelled at everything – make a marvelous team as a monarchical mother and daughter in a romantic comedy about love and marriage among the crowned heads of Europe. Based on Ferenc Molnar’s play The Swan, the film was remade in 1956 featuring Grace Kelly in Gish’s role, just before she became the real-life Princess Grace of Monaco. From the DVD! END_OF_DOCUMENT_TOKEN_TO_BE_REPLACED