A gambler attempts to give guidance to a young man who is out for revenge against a mutual enemy. END_OF_DOCUMENT_TOKEN_TO_BE_REPLACED

The true story of a rich girl who was abducted by American revolutionaries in the 1970’s. Her time spent with her captors made her question herself and her way of life and she joined forces with the cause that her abductors were fighting for. This created a US scandal and Patty Hearst has become a pop culture fixture. END_OF_DOCUMENT_TOKEN_TO_BE_REPLACED

A fictionalized account in four chapters of the life of celebrated Japanese author Yukio Mishima. Three of the segments parallel events in Mishima’s life with his novels while the fourth depicts the actual events of the 25th Nov. 1970. END_OF_DOCUMENT_TOKEN_TO_BE_REPLACED

Quote:
Julian makes a lucrative living as an escort to older women in the Los Angeles area. He begins a relationship with Michelle, a local politician’s wife, without expecting any pay. One of his clients is murdered and Detective Sunday begins pumping him for details on his different clients, something he is reluctant to do considering the nature of his work. Julian begins to suspect he’s being framed. END_OF_DOCUMENT_TOKEN_TO_BE_REPLACED

Quote:
Paul Schrader’s directorial debut examines the trials of Detroit autoworkers living at the mercy of a heartless corporation and a corrupt union. Surviving from paycheck to paycheck, Checker Cab assembly linemen Zeke (Richard Pryor), Jerry (Harvey Keitel), and Smokey (Yaphet Kotto) scrape by and take pleasure in a few rounds of beer or bowling (and occasional illicit amusements). But when their money troubles pile up, Jerry and Smokey join Zeke in a desperate plan to steal cash from their local union office. Along with a piddling $600, they unexpectedly swipe evidence of union corruption. END_OF_DOCUMENT_TOKEN_TO_BE_REPLACED Quote:
“Dark” was filmed in 2013 and released in 2014 under the titled “Dying of the Light.” That film was taken from me after the first director’s cut, re-edited as well as scored and mixed without my input. I offered to revisit the film, cut and mix a new version at my own expense but was denied permission by the producers. This cut, now called “Dark,” was created using work print DVDs. I had no access to the original hi-res footage and unmixed sound. I tried to used those limitations to my advantage when creating this new film. I had been working toward a more aggressive editing style when “Dying of the Light” was taken away. “Dark” represents the direction I was hoping to go. “Dark” was not created for exhibition or personal gain. It is for the historical record. A digital file of the film can be seen by prior request at the UCLA Film Archives in Los Angeles, the Harry Ransom Center at the University of Texas, Austin and the Museum of Modern Art film department in New York City.
-Paul Schrader END_OF_DOCUMENT_TOKEN_TO_BE_REPLACED 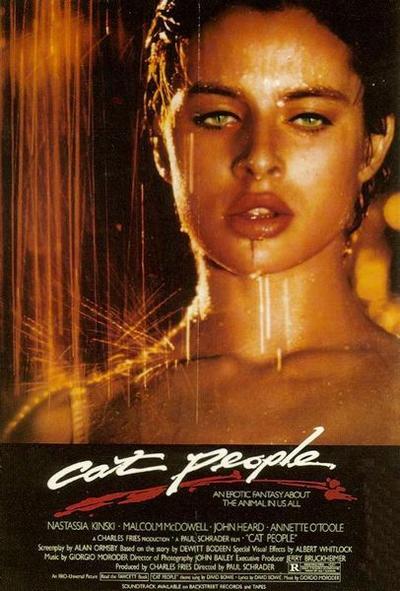 Plot :The Cat People originated way back in time, when humans sacrificed their women to Leopards, who mated with them. Cat People look similar to humans, but must mate with other Cat People. We follow brother and sister – who seem to be the only ones of their kind left END_OF_DOCUMENT_TOKEN_TO_BE_REPLACED