Synopsis:
After inadvertently killing his girlfriend, a man (Asano) flees Macau for Thailand in an attempt to cope with his guilt, and avoid possible arrest. But the relocation doesn’t prevent his problems from following him, as his new friends could be potential enemies. END_OF_DOCUMENT_TOKEN_TO_BE_REPLACED

Quote:
Pu, a young girl, has been dreaming that her mother, who had died some years before, is building a house. A fortune teller advises her that, should she continue to have this dream, her father will die when the house is completed. Her father, a playboy, is a karaoke regular. He eventually becomes involved with Yok who has connections with the Chinese Mafia. Noi, son of an American soldier who dreams of saving money, is learning English and wants to leave for America. He is in love with Pu, but too shy to reveal his love for her. Pu cannot stop dreaming about the house. Her father’s relationship with Yok brings him nothing but bad luck… .. END_OF_DOCUMENT_TOKEN_TO_BE_REPLACED

Quote:
As any fan of Asian film can tell you there are two major film producing countries on the rise right now. While Hong Kong is trying to fight their way out of a massive industry decline triggered by the reversion to Chinese rule and Japan seems content to hold steady the film cultures of Korea and Thailand have exploded to the forefront, both in terms of quantity and quality of the films being produced. And without a doubt one of Thailand’s brightest lights is writer / director Pen-Ek Ratanaruang. END_OF_DOCUMENT_TOKEN_TO_BE_REPLACED Quote:
An introspective, obsessive-compulsive Japanese expatriate named Kenji (Tadanobu Asano) reflects in voice-over the overt absence of motivation for his desire to end his life as he meticulously arranges the requisite accoutrements for his latest suicide attempt: a hangman’s noose strategically rigged towards the center of the hallway so that his lifeless body is visible upon entering the front door, a neat pile of books to stand on and eventually kick out beneath his feet, an obligatory note cradled on the palm of his hand – facing forward – that enigmatically reads “This is bliss”. It is a carefully orchestrated scenario staged for dramatic effect that would soon be abruptly – and rudely – interrupted by the incessant ringing of the doorbell after which he is greeted by his animated and presumptuous brother, a volatile and ill-mannered yakuza named Yukio (Yutaka Matsushige) lying low from his mob boss after having an affair with his daughter, who then hands him a six-pack of beer, a pair of shoes, and a gift-wrapped box that, as he immediately clarifies, is not intended to be a present for him. END_OF_DOCUMENT_TOKEN_TO_BE_REPLACED 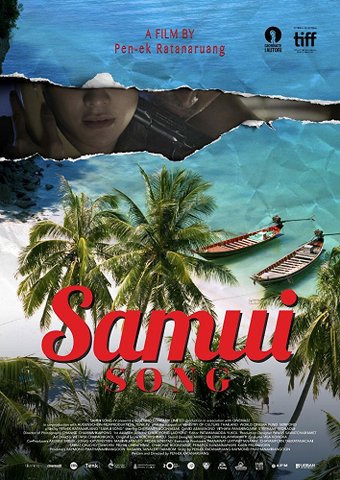 Quote:
Interracial love, religious cults, hi-so culture (Thai high society) and an appetite for raw offal enrich and distract Thai auteur Pen-ek Rataranuang’s classic noir about a marriage turned murderous. Mystery and danger percolate in “Samui Song” all the way till the elliptical ending, which leaves audiences with a sense of lingering disquiet. However, there’s a certain spark missing both from the characters and the overall muffled tone. Heading to Toronto after opening the Venice Days section, the film should pique buyer interest based on the enduring popularity of the writer-director’s mid-career work, “Last Life in the Universe” and “Invisible Waves.” END_OF_DOCUMENT_TOKEN_TO_BE_REPLACED

Tul is about to see his world turned upside down. When we first meet him, he’s been sent a package of photos and data, which he examines and then promptly puts through the shredder. He shaves his head, dons a monk’s robes, and walks onto the gated estate belonging to the man in the photos. Tul then takes a pistol and fires a bullet into the man’s neck. More shots are fired, one of them hitting Tul in the head. Everything turns black. When Tul wakes up three months later, all that he sees is inverted. Is it some bizarre brain injury, or some form of karmic retribution? In the disorienting world of Headshot, such questions linger, and draw us closer to its violence and mystery. END_OF_DOCUMENT_TOKEN_TO_BE_REPLACED