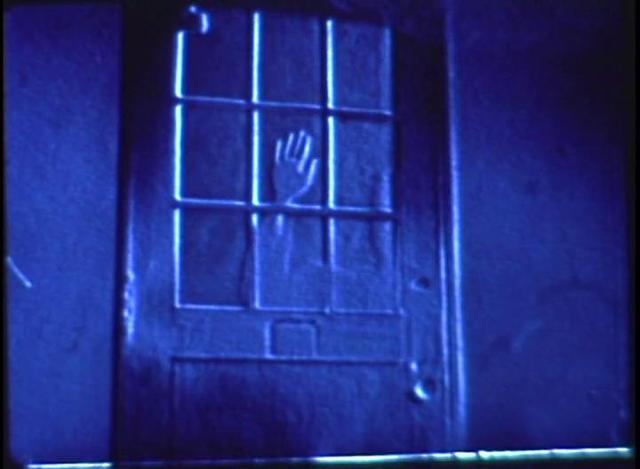 Quote:
A little nachtmusick, a deep blue overture to the series. Breathing in the cool night airs, breathing out a children’s song; then whispering a prayer for a night of easeful sleep. END_OF_DOCUMENT_TOKEN_TO_BE_REPLACED

Synopsis
In memoriam – Mark LaPore. Darkness at the edge of town, light at the end of the tunnel, a stalled hearse and fires on the plain. END_OF_DOCUMENT_TOKEN_TO_BE_REPLACED

Synopsis
NOCTURNE strongly evokes one of Brakhage’s most exquisite films, FIRE OF WATERS (1965). Its setting is a suburban neighborhood populated by kids at play and indistinct but ominous parental figures. A submerged narrative rehearses a type of young boy’s nighttime game in which a flashlight is wielded in a darkened room to produce effects of aerial combat and bombardment. A sense of hostility tinged with terror seeps into commonplace movements… Fantasy merges with nightmare, a war of dimly suppressed emotions rages beneath a veneer of household calm… In NOCTURNE, found footage is worked so subtly into the fabric of threat that its apperception comes as a shock ploughed from the unconscious. –Paul Arthur END_OF_DOCUMENT_TOKEN_TO_BE_REPLACED

Synopsis
Machinima film made by Phil Solomon and MarK LaPore briefly before his death. END_OF_DOCUMENT_TOKEN_TO_BE_REPLACED

“Imagining one of those rusted medieval film cans having survived centuries, a long lost Biograph/Star, a Griffith Melies co-production, a two-reeler left to us from, say, the Bronze Age, a time when images were smelted and boiled rather than merely taken, and they poured down like silver, not to be fixed and washed, mind you, but free to reform and coagulate into unstable, temporary molds, mere holding patterns of faces, places, and things, shape-shifting according to whim, need, the uncanny or the inevitable. . . WALKING DISTANCE is a simple Golden Book tale of horizontals and verticals, a cinema of ether and ore. . . ” END_OF_DOCUMENT_TOKEN_TO_BE_REPLACED