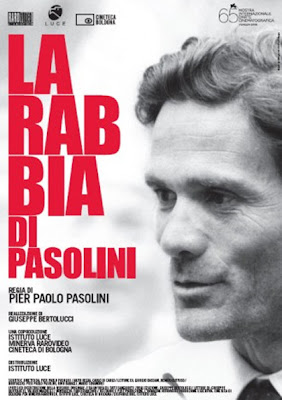 Quote:
La Rabbia employs documentary footage (from the 1950’s) and accompanying commentary to attempt to answer the existential question, Why are our lives characterized by discontent, anguish, and fear? The film is in two completely separate parts, and the directors of these respective sections, left-wing Pier Paolo Pasolini and conservative Giovanni Guareschi, offer the viewer contrasting analyses of and prescriptions for modern society. Part I, by Pasolini, is a denunciation of the offenses of Western culture, particularly those against colonized Africa. It is at the same time a chronicle of the liberation and independence of the former African colonies, portraying these peoples as the new protagonists of the world stage, holding up Marxism as their “salvation,” and suggesting that their “innocent ferocity” will be the new religion of the era. Guareschi’s part, by contrast, constitutes a defense of Western civilization and a word of hope, couched in traditional Christian terms, for man’s future. END_OF_DOCUMENT_TOKEN_TO_BE_REPLACED