Synopsis:
Film opens on December 18, 1999, just a few days before the dawn of the new century. A local reporter, Iron Idem, announces that the Martians have landed. Shortly after that his program loses its independence: he is given the script telling the crowds how to welcome the invaders. Then the chaos breaks out: the Martians and police mistreat the populace; things become violent. Idem’s own wife is kidnapped and it seems somebody is trying to reduce his effectiveness as a reporter. Idem decides to fight back: he illegally broadcasts a message during the rock concert, but nobody believes him anymore. END_OF_DOCUMENT_TOKEN_TO_BE_REPLACED

Quote:
After a five-year hiatus from filmmaking, Piotr Szulkin returned in 1990 with “Femina”, based on a novel by Krystyna Kofta and inspired by Luis Bunuel.
The main character is Bogna, a thirty year old woman lost in her surrounding reality and unhappy in her private life. After her husband departs for a foreign scholarship, Bogna learns that her mother died. The trip to her hometown for the funeral becomes a voyage in time, during which she relives the memories of her idyllic childhood.
As beautifully mounted as any of Szulkin’s films, it’s full of delirious wide-angle imagery (at times recalling the films of Terry Gilliam and Wojciech Has). Unavailable on DVD even in Poland, this is a most unfairly neglected work by Szulkin. END_OF_DOCUMENT_TOKEN_TO_BE_REPLACED 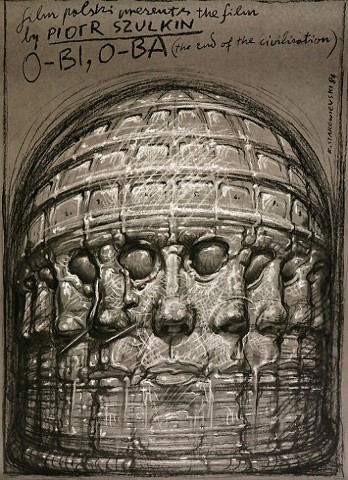 In a murky, sometimes confusing tale about a future dystopia in which people are waiting — and waiting — for a rescue ship called the Ark, there are several good one-liners, but they are outnumbered by the puzzling riddles and symbolism that permeate the story. The flotsam and jetsam of humanity are huddled together in an underground labyrinth after civilization as we know it has been obliterated by the Bomb. The survivors are protected by a dome which a repairman notes is bound to crack before the Ark arrives because it was constructed under a one-year plan. The hero of the film searches for the origins of the myth about the Ark and along the way falls in love with a prostitute. It seems the world’s oldest profession has also survived the nuclear holocaust. END_OF_DOCUMENT_TOKEN_TO_BE_REPLACED