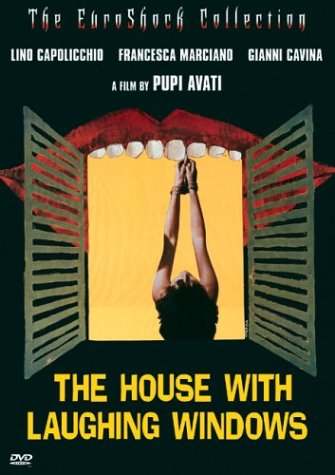 SYNOPSIS
Though fans of typical Italian horror films may find House With the Windows That Laugh lacking in the stylistic excesses of many of its contemporary companion pieces, it exceeds its contemporaries in almost every other area. Imbued with an overwhelming sense of dread that grows to an almost unbearable pitch, director Pupi Avati sets the deliberate pace of the film in contrast with the sense of solemn oppression that never ceases from the first to the last frame of the film. As the painter hired to restore a fresco in the church of a small Italian town learns more of the sordid legacy of its original artist, the calm pacing of the film reveals each twisted secret at impeccably timed intervals, never revealing details too soon, and often leaving the viewer hanging just long enough to build the appropriate anticipation needed for each revelation to have an acute and horrifying impact. Characters seem to be literally swallowed in the sea of darkness surrounding the mythology of the deranged painter of the original fresco and his mysterious sisters. With the soul of the main character at stake as he begins to feel possessed by the same disturbing compulsions that propelled the original artist into madness, the question as to if he will solve the mystery in time, or become another sacrifice in the black legacy, is a testament to Avati’s masterful ability to manipulate the expectations and emotions of his audience, only to shatter whatever preconceptions they may have in the film’s shocking climax. (Jason Buchanan on All Movie Guide) END_OF_DOCUMENT_TOKEN_TO_BE_REPLACED