IMDB wrote:
Naive, but brash and sultry teenage runaway Bonnie finds herself lost and adrift in America. The lovely young lass runs afoul of a colorful array of evil oddballs who all treat her like an object: violent criminal Pat makes Bonnie help her kidnap the middle-aged Dan Daubrey; domineering lesbian painter Geraldine Mills wants Bonnie to be her kept girl and uses her as a model; and wicked misogynistic rich sicko Vincent Stackman desires poor Bonnie as the ultimate prized possession in his menagerie of caged female animals he keeps locked up in the basement of his swanky remote mansion. END_OF_DOCUMENT_TOKEN_TO_BE_REPLACED 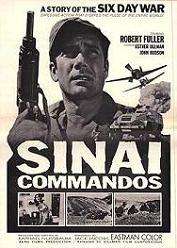 imdb comment wrote:
This movie could be consider as one of the few movies that described the historic moment that israeli people lived in Israel during the Six-Day War, especially because they were surrounded by a great number of enemies , and their determination to remain like a Jewish State allowed to them to defeat it. I watched the movie like 20 years ago, and in that time, I Got the oportunity to record in my Betamax , and I still have it with me, and when I have time, I enjoy watching it again. The best scene could be when the commandos destroyed the radar station from Egyptian Army. END_OF_DOCUMENT_TOKEN_TO_BE_REPLACED