Plot: Talkie Era musicals were usually all-star revues or tales of backstage heartache and triumph. Golden Dawn – based on a 184-performance, 1927 operetta co-created by Oscar Hammerstein II – ambitiously breaks free of those musical confines to expand the genre’s cinematic reach. Set in World War I-era Africa, it tells the tale of Dawn, a tribal woman in love with a British soldier but chosen to be the sacrificial bride of a god. Stage sensation Vivienne Segal (perhaps best known for starring opposite Gene Kelly in 1940 Broadway’s Pal Joey) portrays Dawn. The film was originally shot and released entirely in color (another example of the production team’s ambitiousness), but color prints have unfortunately long been lost. END_OF_DOCUMENT_TOKEN_TO_BE_REPLACED

Having previously played Billy the Kid, Audie Murphy assumes the role of Jesse James in Kansas Raiders. The plot finds Jesse and his brother Frank, together with the Younger Brothers joining Quantrell’s Raiders. Idolizing Quantrell, Jesse believes that his hero’s mission — to save the Confederacy by sacking Kansas — is just. Only when it is too late does Jesse discover that Quantrell is little more than a bloodthirsty mercenary. The James and Younger Brothers are depicted as innocent dupes of a madman, which isn’t surprising considering how often Hollywood has whitewashed Jesse and Frank in other films.

“The Man from Cairo”, a Michaeldavid production for distribution by Lippert, with Ray Enright the only credited director on the film print, finds Mike Canelli, the man from Cairo, nosing around Algiers with mystery surrounding the people he meets and the things he does and has done to him, all deriving from the war-time theft of $100,000,000 in gold which lies somewhere in the adjacent desert. People representing many nationalities and reasons are also seeking the gold. It boils down to a battle between Canelli and the original looter aboard a speeding train. END_OF_DOCUMENT_TOKEN_TO_BE_REPLACED

The wonderful Warner Bros. stock company goes through its customarily breezy paces in Havana Widows. Joan Blondell and Glenda Farrell star as Mae and Sadie, a couple of hard-boiled dames who support themselves by shaking down wealthy and susceptible older men in Havana. Their current target is Deacon Jones (Guy Kibbee), a self-appointed moralist whose rock-ribbed values disappear after the third drink. But Blondell spoils the scam when she falls in love with the Deacon’s son Bob (Lyle Talbot). Less than a month after the release of Havana Widows, many of the same cast members were back to their old tricks in Convention City. ~ Hal Erickson, All Movie Guide
END_OF_DOCUMENT_TOKEN_TO_BE_REPLACED 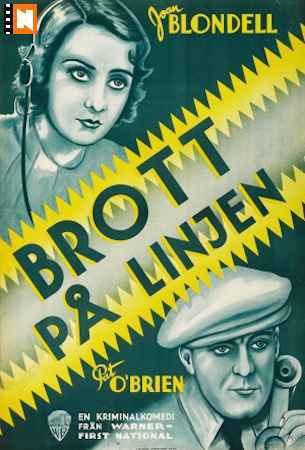 Plot:
The adventures of wisecracking telephone repairmen Terry and Johnny are by turns comic, risque, and heroic. Terry pursues Marie, a hotel switchboard operator, who loses her job when she innocently does a favor for gangster Nicky. Terry gets Marie a job with financier Schuyler; but Nicky has new plans for her. END_OF_DOCUMENT_TOKEN_TO_BE_REPLACED 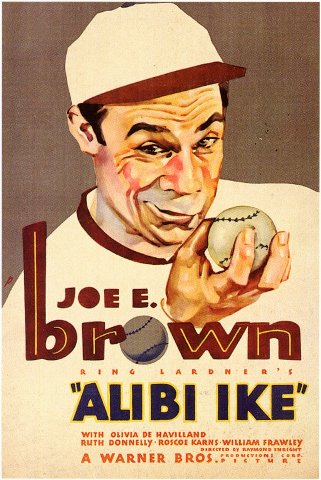 Plot: Rookie pitcher Francis “Ike” Farrell comes seemingly out of nowhere to help the Cubs go for the pennant. His idiosyncratic ways, which include excuses and alibis for everything, drive his manager and fiancee crazy in this baseball farce. Written by Jerry Milani END_OF_DOCUMENT_TOKEN_TO_BE_REPLACED