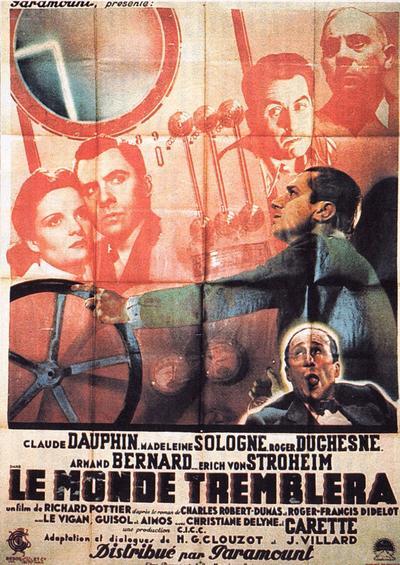 Synopsis:
In this sci-fi film, a scientist invents a prescient machine that can tell people when they will die. Oddly enough, the people do not want to know and therefore begin to riot…

Review:
With capital supplied by the unscrupulous banker Emil Lasser, Dr Jean Durand succeeds in creating a machine that can predict, to the nearest minute, when an individual will die. A ruthless man facing financial ruin, Lasser intends using Durand’s invention for a crooked life insurance business, but the scientist refuses to go along with the scheme, even though he is in love with Lasser’s daughter, Marie‐France. Subjecting himself to Durand’s machine, Lasser learns he has only a few days left to live. He ends up committing suicide, after leaving a note to his daughter warning her to stay away from Durand. As Marie‐France embarks on a new romance with Durand’s best friend Dr Gérard Gallois, Durand begins capitalising on his invention and soon has a steady stream of clients eager to know the exact date of their demise. The implications of Durand’s discovery soon hits home when people, knowing they have only a short time to live, begin behaving in an irresponsible manner. Durand realises too late that he has created a monster… END_OF_DOCUMENT_TOKEN_TO_BE_REPLACED